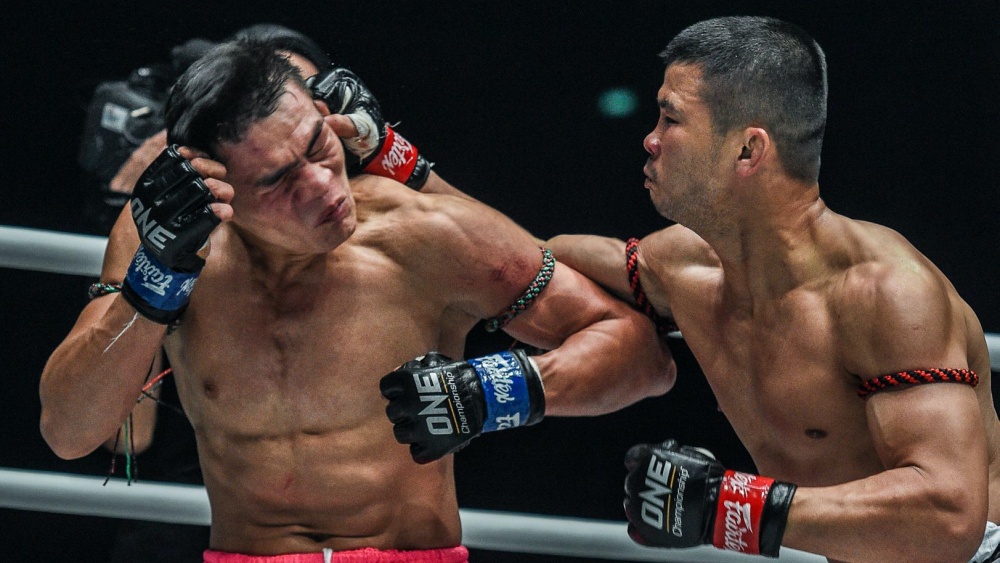 The Most Memorable Muay Thai Finishes In ONE Championship History

This article will explore some of the most impressive Muay Thai finishes under the ONE Championship banner:

Japanese Muay Thai specialist Momotaro scored one of the most significant victories of his career when he squared off against the legendary Singtongnoi at ONE: IMMORTAL TRIUMPH held in Vietnam.

The two exchanged kicks during the opening moments of their showdown, then Momotaro caught Singtongnoi off guard by taking a step before firing off a spinning back fist that sent him stumbling backward. Momotaro made the most out of the moment, suffocating Singtongnoi with a barrage of punches, knees, and elbows. That sent Singtongnoi to the canvas.

Singtongnoi tried to get back to his feet, but referee Oliver Coste stopped the fight as he stumbled backward after getting back up. The entire fight lasted 41 seconds, giving Momotaro one of the fastest finishes in ONE Super Series history. The win also established Momotaro as a top contender in the promotion’s flyweight division.

Liam Harrison earned his first win in the One Super Series with a dominant performance against Mahmoud. The two collided at ONE: A NEW TOMORROW, and Harrison dominated from the opening bell. He pinned Mahmoud against the ropes and sent him to the canvas early in the round with a powerful left hook.

Mahmoud shook it off and got back to his feet, but Harrison was all over him. He kept up the pressure, sending Mahmoud to the canvas with a barrage of elbows. Too tough for his own good, Mahmoud got back up for a second time. Harrison swarmed him again, hitting him with a barrage of punches and elbows. Harrison sent Mahmoud to the canvas for the third time in the first round, forcing the referee to jump in and wave the fight off.

The legendary Gaiyanghadao couldn’t have been more impressive when he squared off against Fairtex at ONE: EDGE OF GREATNESS. Fairtex came to fight, but Gaiyanghadao quickly took control of the fight. He sent Fairtex to the canvas twice during the early rounds before putting him away with a heavy right cross that left Fairtex unconscious.

4) Rodtang Jitmuangnon Vs. Sok Thy

Muay Thai superstar Rodtang earned a shot at the ONE Flyweight Muay Thai World Championship with his impressive finish of Sok at ONE: WARRIORS OF LIGHT. The finish came in the second round of their showdown after an action-packed first round.

During the fight’s opening moments, Rodtang softened Sok up with powerful kicks to his lead leg. He then followed up with kicks aimed at Sok’s thighs, reducing his mobility, making it easier for Rodtang to cut off the ring.

Sok did his best to keep Rodtang off him with push kicks and punches, but Rodtang kept pressuring him. Rodtang almost brought the contest to an end during the final moments of the first round, peppering Sok with low kicks and hooks that sent him to the canvas. Sok managed to get back up and survive the rest of the round.

Rodtang’s onslaught continued during the second round. He continued to fire off powerful low kicks to Sok’s leg and punches to keep him guessing. He eventually sent Sok to the canvas with a low kick, forcing the referee to stop the fight.

Janet Todd scored one of the most impressive knockouts of her career when she faced Vandaryeva at ONE: CENTURY PART I. Todd started the fight aggressively, but Vandaryeva responded with some impressive spinning kicks that earned her some respect. Todd adjusted by closing the distance and forcing Vandaryeva to fight in the pocket.

Both women chased the knockout, trading powerful strikes, but it was Todd who landed the fight-ending strike. She distracted Vandaryeva with a jab feint and fired off a high kick that literally sat Vandaryeva down midway through the second round.

Yodsanklai squared off against Luis Regis for his second fight under the ONE Championship banner. The two headlined the ONE: DESTINY of CHAMPIONS fight card. The round was scheduled for three rounds, but it never made it to the judges’ scorecards.

Fairtex came out aggressively, pushing the pace and keeping Regis on his backfoot. He eventually hurt Regis with a crisp jab-cross combo and followed up with three consecutive uppercuts that all landed flush. That sent Regis to the canvas face first and motionless, bringing the contest to an end.

Everything seemed to be working perfectly for Rui Botelho when he faced Ogasawara at the Pinnacle of Power card. Ogasawara struggled during the early moments of the fight as he couldn’t find his range or work his clinch game.

He was down a round, and Botelho kept the pressure on him during the second round. Ogasawara responded with a beautiful spinning back elbow that caught Botelho entirely off guard. That was all he needed to win the fight.

Tawanchai couldn’t have looked any better during his ONE Super Series debut. His offense was fluid, and his defense was impregnable. Clancy was a game opponent, and he did his best to push the fight’s pace.

Both men exchanged kicks early in the contest, but Tawanchai’s kicks seemed to do more damage. Tawanchai sent Clancy to the canvas with an uppercut followed by a straight. Clancy quickly got back up to his feet, and he kept pushing the pace of the fight.

Clancy kept trying to close the distance during the second round, but that ended up being his undoing. He walked right into a left roundhouse to the chin that left him unconscious on the canvas.