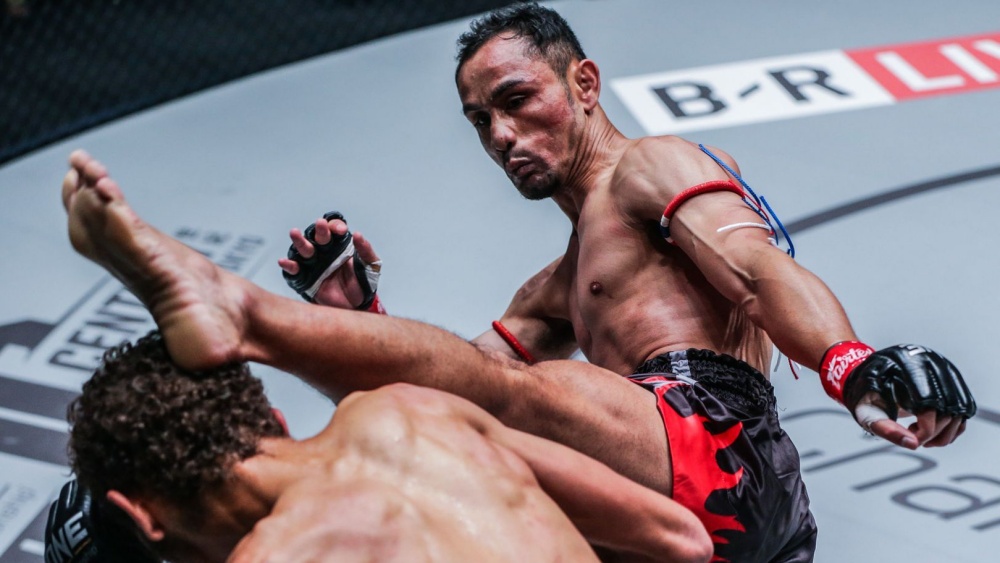 Muay Thai is all about the kicks.

For many of the best athletes in the art of eight limbs, kicking is the foundation of their skillset, and it’s what makes them so dangerous.

You’ll get nowhere in the ring – whether you’re competing in club shows or Lumpinee Stadium – without a diverse arsenal of kicking techniques.

These are the fundamental kicking techniques you need to know to build the foundations of your Muay Thai game, and a few crazy moves only the most advanced competitors can pull off.

When you talk about Muay Thai kicking 101, you’re talking about roundhouse kicks.

These are arguably the most important and effective weapons in the sport. They’re powerful and can target almost any part of your opponent’s body.

Unlike roundhouses in other martial arts, Muay Thai athletes throw these kicks from their hips to generate more significant force. Plus, the impact is made with the shin, which is far harder and more durable than the foot or instep.

It is most common to see kicks coming off the rear leg, but it definitely pays to hone your striking ability with your lead leg, too.

Kicking by lifting that front leg prioritizes speed, and a switch kick will help you to strike with power.

Whatever legs you use, there are three basic varieties of roundhouse kicks.

Muay Thai scoring can be confusing, but one thing is for certain – if you land a ton of hard kicks to your opponent’s midsection, you’ll be on your way to a win on the scorecards.

A well-placed and well-timed strike could even end a fight in one blow.

Even if these kicks are partially blocked by an athlete’s arm, they will not stop it from scoring.

Plus, the damage they absorb could seriously compromise their punching ability, like when Evolve’s own Nong-O Gaiyanghadao showed against Hayato Suzuki.

Because you don’t need much flexibility to throw a successful leg kick, they are the easiest kicking technique in Muay Thai.

That also means they don’t score as highly as strikes to the body, but they can still be effective.

Low kicks mainly target the inner or outer part of the thigh, and an accumulation of damage on these areas could slow your opponent down over time, or even finish them.

However, because most elite Muay Thai athletes are so well-conditioned, a stoppage via leg kicks is not too common at the highest level.

If you can connect with a high kick – either directly to the head or on the neck – your fight could be over in a split second.

Unfortunately, that’s easier said than done. Because your leg has to travel so far, it needs to be timed and set up well so your opponent doesn’t see it coming.

If you can distract your opponent and get them to drop your guard, you might be able to get a window of opportunity to land a devastating blow.

Push kicks, front kicks, or teeps might be the most versatile strikes in Muay Thai.

Striking with your foot by thrusting your leg straight forward is great for both attack and defense.

The most frequent target for a push kick is a rival’s body. The strike acts as a lance to move them back or keep them at bay.

It’s not uncommon to see teeps to the thighs to disrupt rhythm. Front kicks to the face are rarer, but high-quality athletes can use them to get spectacular KOs.

You might see some Muay Thai fighters use their lead-leg push kick like a boxer world use their jab. It can be used to establish range, probe their attacker, or as a powerful offensive strike – especially when the athlete hops forward to increase the power.

The back-leg teep has to travel further and is easier for an opponent to see coming, but it naturally packs a lot more power and is sure to move your rival backward if it connects.

That takes care of the most fundamental kicks in Muay Thai, but there are plenty of others that can be used in the sport.

The following are rarely seen in the ring because they’re so difficult to master. If you can’t use them well, there’s no point using them in a fight because a failed attempt will get you into a world of trouble.

However, highly-skilled athletes with these weapons in their offensive arsenal can become even more dangerous, as well as instant fan favorites when they pull them off.

Spinning back, heel, and wheel kicks are not a big part of a traditional nak muay’s arsenal.

It’s rare to see a Thai fighter use these in a stadium, but they are becoming a lot more common in the sport in Thailand and abroad thanks to the influence of Western athletes with hybrid styles rooted in other martial arts.

Anyone who can use these kinds of crazy techniques instantly becomes more unpredictable. The athlete’s rotation brings a ton of power to these, too, so they’re very dangerous.

The question mark kick is also known as the Brazilian kick because of the way karatekas from Brazil made it famous in competition.

The strike is done when an athlete uses quick hip movement to redirect the arc of their kick after they initially lift their knee. The motion of their foot is the shape of a question mark, hence the name.

This is also not a traditional Muay Thai move, but it has been famously used by the great Saenchai, as well as his old stablemates from Jocky Gym, including the tricky Lerdsila.

Is there anything cooler than jumping and landing a roundhouse kick while you’re still in midair?

The most accomplished nak muay can author a spectacular finish with one of these explosive techniques.

However, most fighters would be well-advised not to even attempt this move in a fight. Get it wrong, and you’ll land as an easy target for a devastating counterattack.

That’s largely down to that man Saenchai again, who has become renowned for styling on opponents and sparring partners with a technique that has become a staple of his fights and seminars.

What you may not know is that cartwheel kicks are illegal under traditional Muay Thai rules because you cannot kick with your glove touching the mat.

Combined with the fact it would take a master to pull it off in competition, it’s best to focus most of your attention on mastering the basics before you even begin to think about attempting something as wild as this.