The Complete Guide To The Muay Thai Push Kick 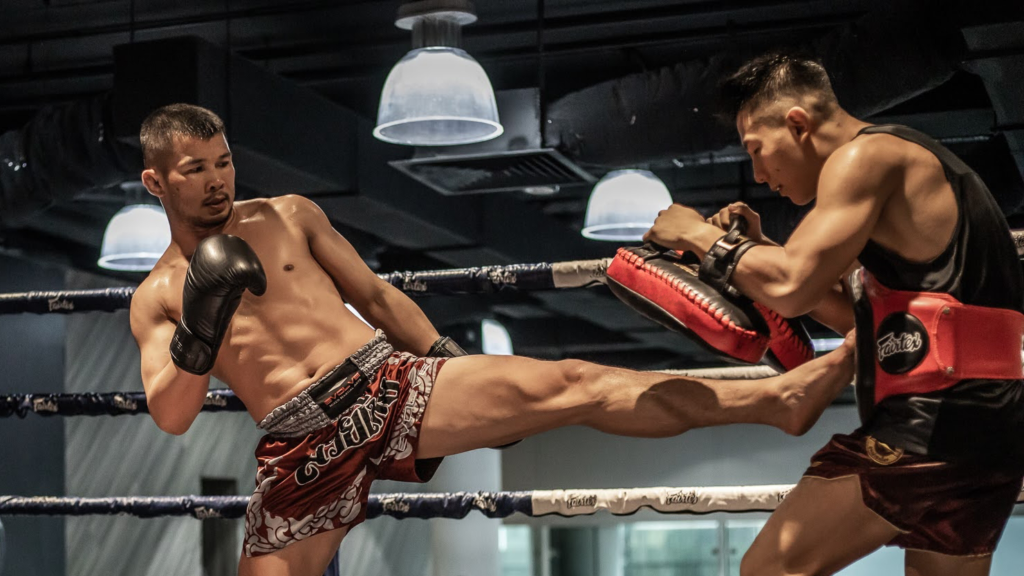 The push kick may be the most important technique in Muay Thai. It is the foundation of a strong skill set in Thailand’s national sport, and it is as fundamental in “the art of eight limbs” as the jab is in boxing.

There are arguably no more versatile techniques than the push kick – also known as the front kick or teep – so it is essential every fighter makes its various forms an integral part of their arsenal. That includes mixed martial artists, too.

Once you have covered the basics of the push kick, take a look at how you can apply it to leave your opponents frustrated, outpointed, or on the canvas.

If you’ve trained Muay Thai for a while, you should be familiar with the mechanics of the push kick following thousands of reps on the bag. However, don’t let that be an excuse to rest on your laurels and forget to maintain the correct form when you throw your strikes.

Forgetting any of these core push-kick principles will compromise your balance and power, or open you up to a counter.

Now that you’ve refreshed your memory, take a look at the main applications for your push kicks.

The beauty of the push kick is that it can be as subtle as it is destructive. A precise attack can give you multiple benefits without too much effort.

A firm front-leg push kick on your opponent’s lead thigh or hip can easily disrupt their rhythm and set them up to absorb your offense. Better yet, if you can time these targeted push kicks as they move forward, you’ll stop their forward momentum.

Even if you don’t take your chance to attack right away, you’ll still have made some valuable moves. The more your opponent has their attacks stopped or has to reset, the more frustrated they may get. If they’re an inexperienced competitor, that could lead to them sacrificing form and technique to try and land something, giving you a great chance to strike back decisively.

Muay Thai is one of the most effective forms of self-defense.

This aspect of the push kick is not going to end up on many highlight reels, but it’s super-important. Just like a boxer can use their jab to measure distance and find their range, Muay Thai fighters can do the same with their front-leg push kick.

Your lead leg is an even more valuable tool than your lead hand because you have much more space to play with. If you can land a push kick with your front leg, you’ll know you’re in range to throw a hard roundhouse kick. You’ll also see how close you are to punching range while crucially hovering just outside your opponent’s punching range.

A key element of finding your range with this method is to maintain integrity with your strikes. Do not sacrifice technique and throw out a lazy kick. Not only will you not maximize the length of your kick, but your rival will also have a chance to capitalize if they’re sharp with a counter that packs far more intensity.

Your front push kick is also arguably your most effective defensive weapon against an oncoming opponent, too – especially if they are stepping into boxing range. As your rival moves forward, jabbing your front foot into their torso will stop them dead in their tracks. The key is to perfect your form, so you push your adversary back without moving back yourself. The result will be that you create space or even knock your assailant onto the canvas.

This simple defensive maneuver can do some damage, too. As the opposing forces of your foot and their midsection collide, you’ve got a good chance of knocking the wind out of your opponent, which will compromise their defense while they recover or even force them to take a knee.

You can achieve a similar result with more power using a rear-leg push kick. However, it takes far more time for your back leg to travel forward and land on its target than it does to lift and land with your front leg, so it might be more beneficial to focus on perfecting strikes with your front leg. 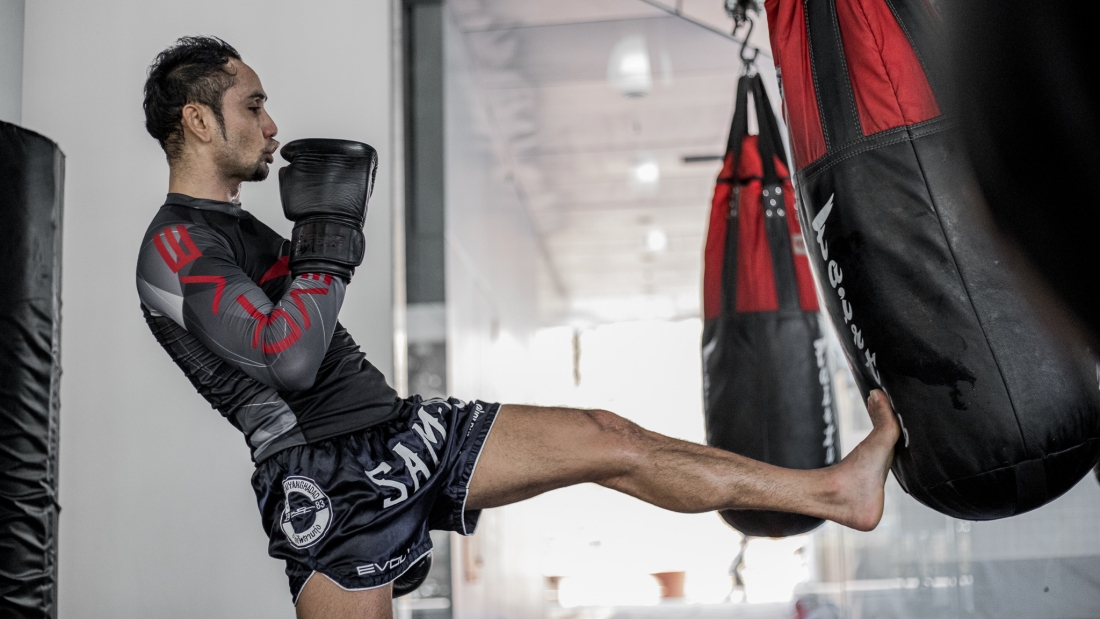 The Muay Thai push kick can be used both offensively and defensively.

Just like a jab, the push kick can do some serious damage, too. When it’s used as an offensive weapon off either leg, your opponent could be sent flying across the ring or even be knocked out. The way Buakaw Banchamek dismantled Masato in their first K-1 World Grand Prix Final match shows just how devastating a sustained push-kick assault can be.

Your rear leg is your go-to for push kick power. It’s going to generate a lot of power on the long journey on your power side and be naturally stronger, so if you can connect with it, you’re almost guaranteed to knock your opponent backward or down onto the mat.

One drawback to leading with your back leg is that the strike will be easy to see coming. If you’re facing a rival who’s more switched-on, it might be best to set it up, but because you’re at long range, punches will not do the trick. A good idea is to fake a round kick to get them to focus on defending their left side and open a gap down the centerline for you to exploit by switching to a push kick.

If you want maximum power from your front leg, the side push kick is the way to go. This technique was the trademark of one of the greatest Muay Thai fighters of all time, Samart Payakaroon.

Because of the side-on stance used to throw this technique, you can cover more distance and strike more explosively down the centerline than with a normal front-leg teep. You can even throw it if an opponent has slipped one of your roundhouse kicks. Plus, it’s a quicker strike than the back-leg push kick. However, missing your mark means you will probably land off-balance and out of position, having expended a ton of energy, leaving you wide open for a counter-attack. For that reason, this is a high-risk strike you should only use in competition if you have perfected it.

Despite the force you can generate from these two techniques, it’s important not to discount the front push kick as an effective offensive weapon. One look at the way Sam-A Gaiyanghadao skips forward to generate extra power and stabs his right foot into rivals shows what a devastating tool it can be. If you don’t put your opponent down, it’s a great first strike to set them up for an even more dangerous shot.

Another key aspect of these push kick techniques is knowing when not to throw them, and how you can simply threaten with them to catch your challenger off-guard.

If you’ve spent a round sticking your front foot into your rival’s midsection, the chances are that they will focus on trying to avoid or counter your push kick. That will leave them wide open to an alternate attack.

The first way to mix things up is to fake by lifting your knee. Then, instead of kicking, plant your front foot on the mat, and follow through with a rear knee.

Alternatively, fake by lifting your knee, step out to the side, and pivot to cut an angle that is perfect for throwing a round kick.

If your opponent is dropping their hands to try and catch or sweep your leg, they’re leaving their head unguarded, so you can fake the kick in the same way, skip forward, and throw an elbow at an open target.

Whatever approach you take, it’s important to lift your knee high as if you were really going to throw a push kick to force a reaction. If your knee does not come above your waist as it would if you were attacking for real, it’s unlikely your opponent will flinch, and you may just run into trouble.

The most spectacular way to show one leg and strike with the other is the jumping switch push kick, which distracts your rival with your front leg before you use your momentum to launch a full-power rear push kick. If you’ve watched the legend Saenchai PK SaenchaiMuayThaiGym compete, you’ve probably seen it in action and wanted to try it yourself, but be careful. Like the side push kick, this is a high-percentage move that takes the kind of skill and timing that Saenchai has honed over decades of competition, so don’t use this high-flying maneuver in a fight without extensive drilling.

Your rear-leg push kick is not quite as versatile when it comes to fakes, but it can certainly be used to set up some fight-finishing moves. Once your adversary starts to expect to defend this technique, you can switch things up halfway through – show them your knee, then march forward instead of thrusting your foot forward. You’ll end up in your opposite stance, where you can throw a powerful kick, knee, or cross, depending on your range.

Most of your push kicks will target your opponent’s torso. It’s a big target to aim for, which means you have a good chance of at least connecting with something.

The most common target is probably the stomach. Even if your rival has abs of steel, this is the softest part of the torso to aim for. Repeated blows there will have a major effect on their breathing and stamina as a fight goes on. If your strikes are timed perfectly as they breathe in, you could wind them and score a knockdown. Landing higher up on the chest gives you a better chance of affecting your rival’s balance, moving them backward and knocking them down.

It is less common to see a push kick to the face, but it’s possible, very effective for disruption, and has the potential for scoring a knockout. However, a front kick to the face is seen as disrespectful in Thailand – even in a fight – and you definitely don’t want to put your soles on your teammates’ faces in training! 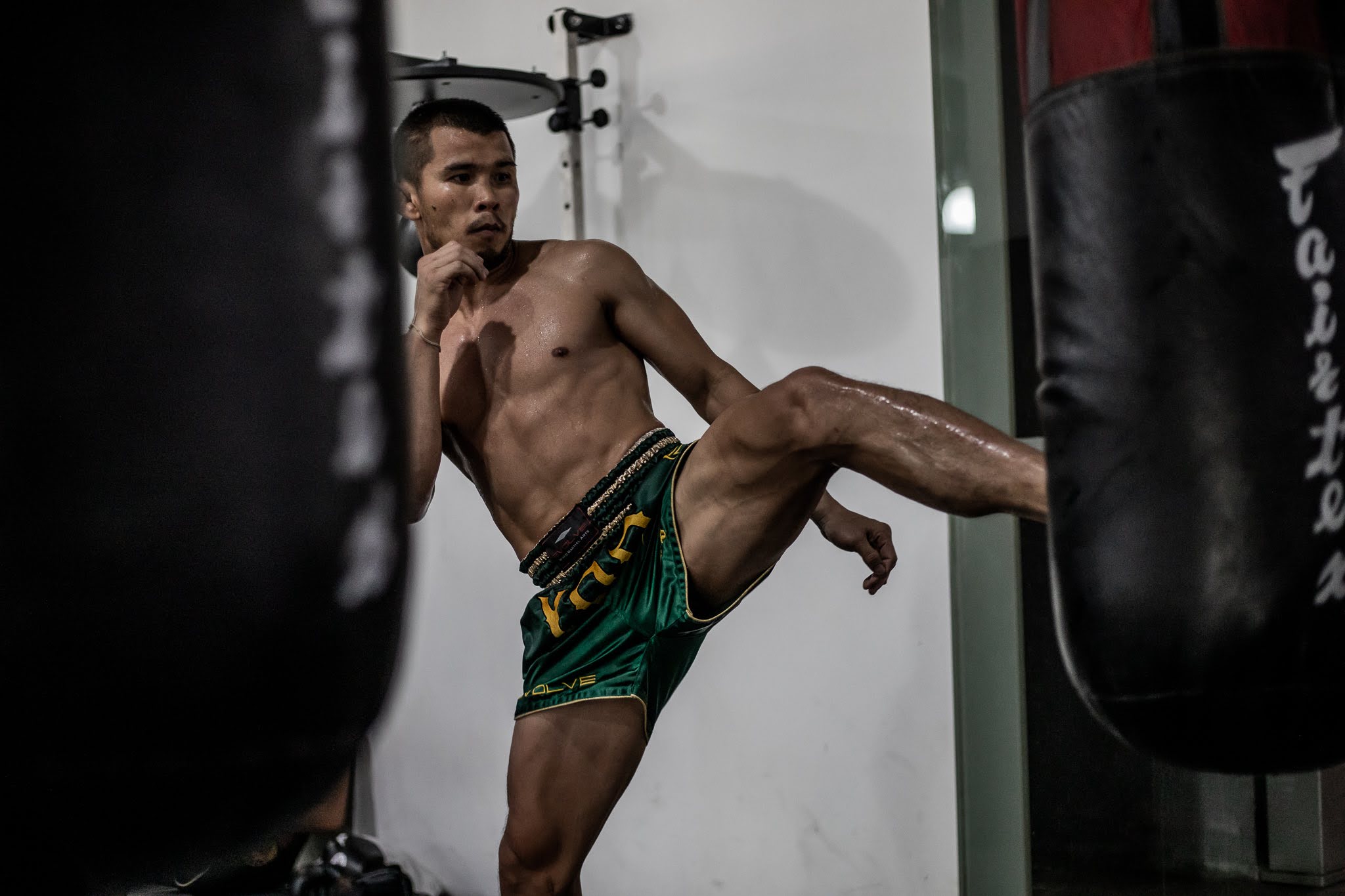 You can practice push kicks on the pads and the heavy bag.

One of the main reasons the push kick is underused in MMA is strikers’ fears of having their kicks caught. However, if your technique is good, you should be able to evade your opponent’s grasp.

If you make sure you strike with the balls of your feet, then withdraw your leg quickly, you’ll leave very little opportunity for your rival to grab your foot.

In the worst-case scenario, you can recover position after a catch without too many problems with a couple of escapes. First, you can continue to teep and kick your way out. By digging your hip into your opponent’s ribs and pushing away, you should be able to break free. Alternatively, you can point your toes, turn halfway toward your opposite side, then flex your knee to take your foot away and land back in your fighting stance. With enough force, you should slide right out.

If all else fails and your opponent strikes back, cover up!

If you found this article interesting, give this one a try!