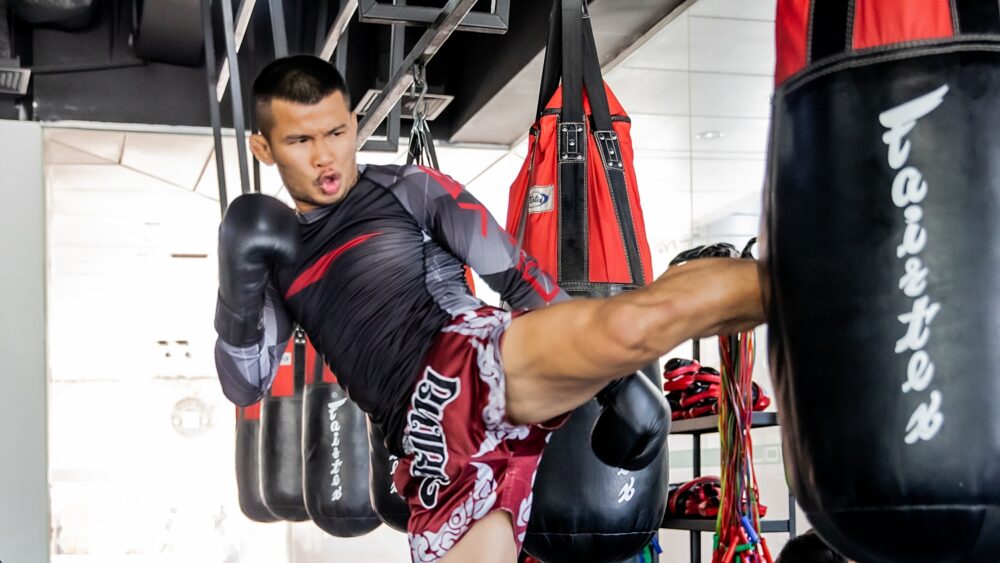 Kicks are a huge part of Muay Thai since they allow you to attack from range. That makes you a harder target for your opponent to counter than when you’re fighting at punching range or closer.

The most commonly used techniques in Muay Thai competitions are the push kick (teep) and the roundhouse kick. The push kick works like a jab. It’s used to measure distance and to keep opponents off you. It can also be used to tire opponents if you put some power behind your attacks.

The roundhouse is one of the most powerful attacks in combat sports, yet it’s a straightforward move to master. The Muay Thai roundhouse is thrown like a baseball bat, unlike kicks from martial arts like karate that land like a whip.

It involves generating additional power by turning your feet, hips, and torso. Muay Thai instructors often teach students to imagine themselves trying to cut through opponents when they throw the roundhouse. The kick is so powerful it should force you to spin a full 360 degrees whenever you miss.

Given how kicks are often your best weapons in Muay Thai, you want to work on your power. Your physical strength isn’t the only factor determining how powerful your kicks are. Other things such as how well you execute your techniques, mobility, flexibility, and balance also play a huge role.

Five Drills To Improve The Power Of Your Muay Thai Kicks

Here are some simple drills you can incorporate into your training to make you a more powerful kicker:

Here’s a drill that helps you to improve your technique and accuracy when throwing roundhouse kicks. The roundhouse loses a lot of the power when it’s not executed correctly. The handshake drill doesn’t directly improve your kicking power, but it improves your technique, making your kicks more accurate and powerful.

Here’s the next drill you should move on to once you’ve mastered the mechanics of the roundhouse kick. This drill helps to improve the speed and power behind your kicks. It also allows you to work on your precision, balance, stamina, and core strength.

The key to getting the most out of this drill is moving around as if you were in a real fight while throwing roundhouse kicks. Try not to stand in one spot the entire time. That’s okay if you’re new to the drill, but work on adding movement to it.

This drill can be incorporated into your workouts since it gets you working hard. Here’s how to drill roundhouse kicks on a heavy bag:

This drill works on your kicking speed and power. It is pretty popular with Muay Thai fighters, even at the highest levels. Try switching up the height of your kicks when performing this drill to improve your agility as well.

Here’s how you turn the wheel: 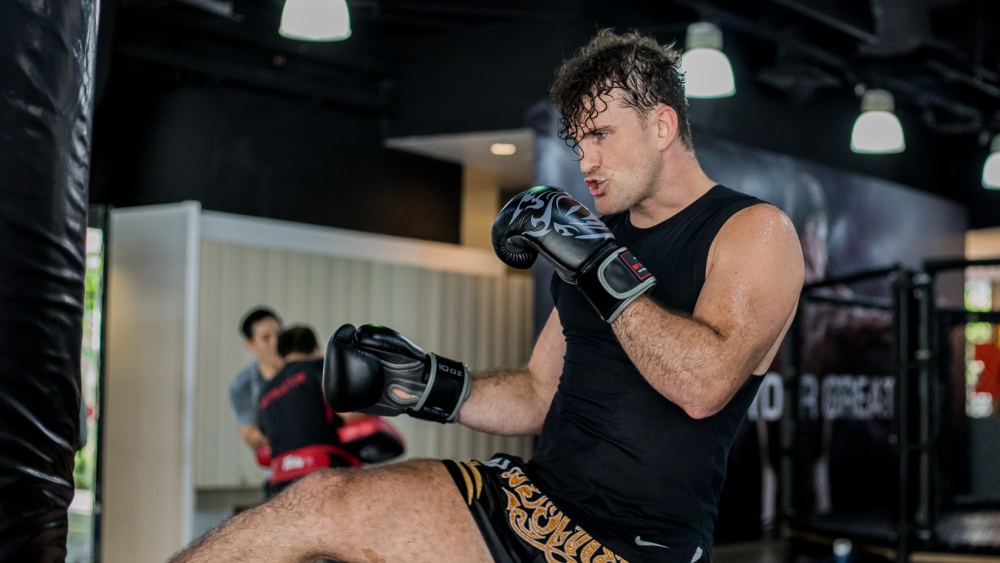 Here’s an effective way to improve your balance while you throw kicks. It also increases the power behind your teep and front kick. The key to getting the most out of this technique is aiming for the same spot every time you throw a kick. Place some masking tape on the bag if that makes it easier to identify your target. Kicking the spot helps to improve your accuracy and prevents the bag from spinning.

The low kick is one of the most effective weapons used in Muay Thai. You can land them from far away without putting yourself at significant risk. This drill helps to improve your technique, speed, power, precision, and balance.