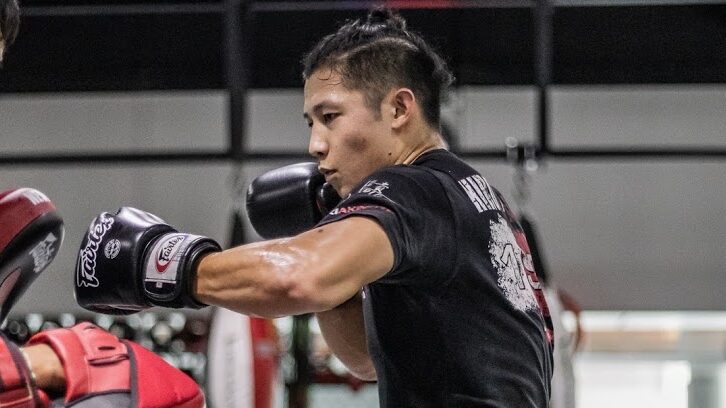 The lead hook is a short, compact, and explosive punch. When executed with proper technique, at the right time, it can do incredible damage. Many experts and professional fighters consider the lead hook the most devastating punch in boxing.

This punch is especially effective because it carries the natural momentum of your body when you throw it. That means the transfer of kinetic energy coincides with the shift of your own body weight, amplifying the damage exponentially. Furthermore, if you can land the lead hook when your opponent is coming forward or not expecting it, it is absolutely destructive.

As a fighter, it’s important to have a powerful lead hook to keep your opponents honest. That being said, you will want to add this amazing punch to your arsenal.

There are many ways to use the lead hook to great effect. While there is no shortage of diverse techniques, we’ve gathered five of the best ways you can incorporate the lead hook into your boxing game.

Today, Evolve University shares five ways you can use the lead hook in boxing.

There’s a reason why the lead hook is the most powerful punch you can throw. That’s because it’s the shortest, most compact punch you can hit your opponent with. The result is a shot that’s packed with explosive kinetic energy, delivered with lightning-quick speed.

By throwing a sharp, leaping, lead hook, you can catch your opponent slacking on defense, loop around his glove guard, and land a clean connect.

The leaping lead hook targets an opponent’s chin, when the opening presents itself. When you explode forward with a quick step, you alter your range compared to simply throwing the lead hook from far away. This will swiftly cover the distance necessary to land this blow.

Multiple-division world champion Saul “Canelo” Alvarez uses the leaping lead hook quite often to start his combinations, or when he can take advantage of an opponent who isn’t anticipating it.

The opposite of the leaping lead hook is the trailing check hook, in that it’s mainly used while on the back foot.

Against an aggressive opponent, you will often find yourself moving backward constantly. You may even find your back against the ropes, or get trapped in corners. This presents the perfect opportunity to throw the trailing check hook to do some real damage.

As your opponent is moving in, make sure to defend yourself. But the moment he takes that quick step forward, you want to take a half step backward and throw the lead hook with all your weight behind it.

If you connect with this punch on your opponent’s jaw, it’s lights out. At the very least, you will have your opponent buzzed from the mere impact. Furthermore, you’re using your opponent’s forward momentum against him, amplifying the damage.

3) Lead hook to the body

Aside from just simply throwing the lead hook to the head, you also want to target the body. Body shots are the best because they can incapacitate any opponent, no matter how tough they are. One well-placed shot to the liver can send any fighter crashing to the canvas.

This punch is easily telegraphed, and most of the time, opponents can see it coming. This is why you have to set this up by throwing a few hard hooks to the head, to get an opponent thinking about it. The hook feint is also a great technique to use to draw a reaction.

Once you catch an opponent biting on your feints, it’s time to unleash the lead hook to the body.

Next is another lead hook counter, but this time, you’re slipping the jab, rolling under the straight, and then coming back over the top with the lead hook. It’s a terrific counter for an opponent’s standard jab-straight combination.

You’re going to look for your opponent to throw the jab, anticipating his movement by watching his feet and lead hand. Once you successfully anticipate the jab, slip to the outside of it, and then immediately roll under to the opposite side in anticipation of the straight.

If executed properly, you’ll have a slight window of opportunity to pop back up over the top with a lead hook. Your opponent will also be vulnerable for a brief moment.

This sequence is textbook and one that is used quite often. Even then, it’s still very effective and difficult to defend against.

Last but not least is the double lead hook. Doubling up on your hooks adds an amazing dimension to your lead hook game.

Make no mistake, however, throwing consecutive lead hooks is a tough technique to pin down. It takes constant practice training to develop your lead arm into a springboard from which to launch this technique. You need those fast-twitch muscle fibers in your shoulder and rotator cuff to be well-developed.

But once you’re able to throw multiple lead hooks in succession, it’s such a dangerous weapon to have in your arsenal.

Mix it up, body then head. Don’t just target one area. Make sure you are keeping your opponent guessing and on his toes, worried about what you’re going to do next. Be unpredictable, so you maintain the element of surprise.

Pound-for-Pound legend Roy Jones Jr. was once nicknamed “Captain Hook” because of his ability to rail off lead hooks in rapid succession, which he often did in his fights.