How To Set Up Low Kicks In Muay Thai

Low kicks are a huge part of the striking arts. It’s one of the most commonly used techniques.

The low kick in Muay Thai, in particular, is a very effective weapon with a variety of uses. Aside from doing damage to an opponent’s leg, the low kick is used to compromise an opponent’s base which affects punching power and mobility.

Knowing how and when to throw a low kick will open your game up, and provide you with a host of options with regards to your combinations.

In this video, Muay Thai World Champion Daniel McGowan teaches students how to properly set up the low kick in their combinations.

Accompanying McGowan is Muay Thai legend and reigning ONE Bantamweight Muay Thai World Champion Nong-O Gaiyanghadao. The two demonstrate a set of drills to practice the low kick against various types of fighters, as well as go into detail about the purpose of each technique.

The low kick is no doubt a very effective technique that can cause a lot of damage against an opponent. If you’re looking to add this technique to your game, you’re learning from the best.

Today, Evolve University shares how to set up low kicks in Muay Thai.

In this first drill, you’ll be looking to change levels and attack the body. You want to start the sequence off by throwing a jab to your opponent’s head. Target the chin or the head area, and throw the jab with conviction. The objective is to earn your opponent’s respect and get him worried about your jab so that he brings his guard up nice and high.

With his guard raised, this will then expose his midsection, where you will throw the next attack in this combination, which is the right body cross feint.

You want to throw the right cross to the body with a lot of force. If it lands, you have a potentially debilitating knockout blow. Alternatively, you can feint the right cross and convert it into a right hook to rake across your opponent’s body. This will effectively create an angle for you to chop his legs with the lead low kick.

This drill is mainly effectively practiced with an orthodox fighter or someone you’re fighting against with the same stance because you’re really targeting the lead leg.

Another variation of this comes after the right feint to the body, you want to dip down as you change levels. Really dip your shoulder down to sell the feint, downwards towards your hips. This will get a reaction out of your opponent, and hopefully, get him to cover up the body. Next is throwing the lead left hook up top.

With the lead left hook, you want to quickly hop into close range slightly to the left side, immediately after you feint with the right body cross. Both legs should follow you quickly behind. If you executed this correctly, you’ll be at the perfect angle to chop your opponent’s lead leg nice and hard.

Hopping with the left hook is important in this sequence because it’s necessary to cover the distance. If you don’t hop, the right cross to the body is too far of a distance shot. You won’t be able to get the necessary reaction from your opponent with that feint. At the same time, you’re also covering the opponent’s blind spot, and they won’t see the low kick coming.

The sequence involves using the jab and the push kick, both weapons to keep the opponent at range. After that, you want to smash a big left body kick to disrupt your opponent’s rhythm. That’s when the stance switch setup comes into place, and then you can take the lead leg with the low kick.

Start by throwing the lead left jab, which again, creates distance. You’ll be pawing with the jab to create distance and find your range. The aim is to get your opponent to cover up with the high glove guard and expose the body.

After the body is exposed, attack with the lead leg push kick and stab it right into the stomach, creating distance again.

As your opponent moves forward to get back into range, your next attack is the left body kick. With this kick, you want it to be as forceful as possible, targeting the body or the arms of your opponent.

What the stance switch fake will do is cause your opponent to raise his leg to block. After that, you can chop at his support leg with the low kick.

Last but not least is the push kick counter. This technique is most effectively used against a long-range fighter who likes to use long-range weapons such as the push kick. When your opponent goes to the push kick, you want to catch it and then counter it with some devastating shots.

Anticipate when your opponent wants to throw the lead leg push kick. At that moment, you want to step back just out of range and catch the push kick under the heel with your left hand. Your right hand then goes on top of the foot to secure the position. This will lead to the counter.

Once you’ve caught the push kick, you’ll pull your opponent’s foot to your left side, towards your hip. With your opponent’s position and stance compromised, it’s time to throw the next strike in the sequence, the left hook.

The left hook doesn’t really have to be a massive punch. It could just be a setup for the low kick. But it can also be used as a knockout blow. Throwing the left hook makes your opponent cover up the face and takes his mind off the low kick or the left leg.

After the lead left hook comes the low kick to the thigh. You want to target the side of the thigh, or even the hamstring, depending on what position you’re in after the left hook lands. Alternatively, you can even use a sweep if you are wrapped around your opponent’s body enough. You can take both of his legs.

After the hook, you have to step outward to land the low kick, otherwise, you’re going to be too close to throw it. You have to create a little bit of an angle by sticking outward with your left leg and then chop that lead leg of your opponent’s. 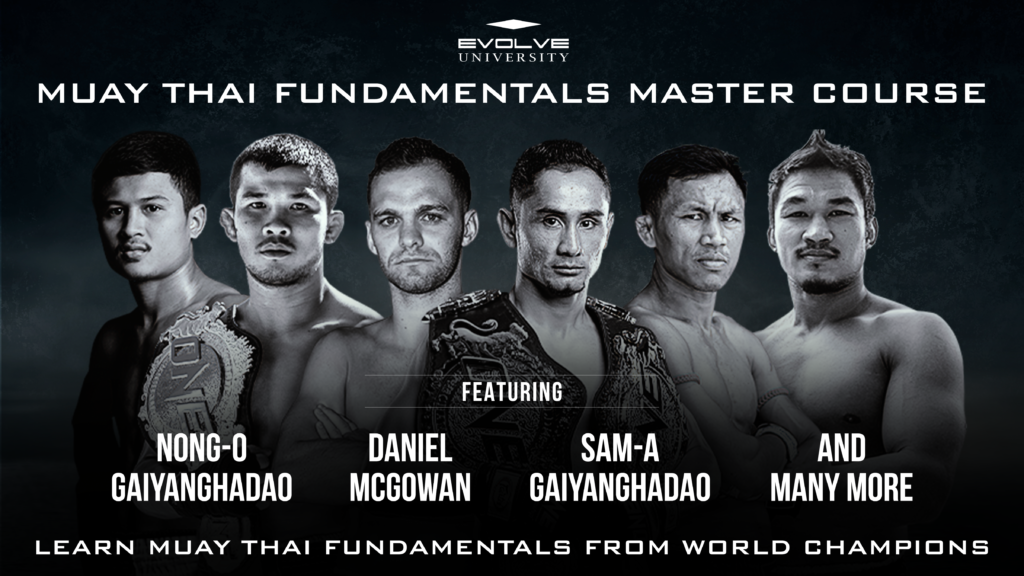