The Most-Used Submission Holds In MMA 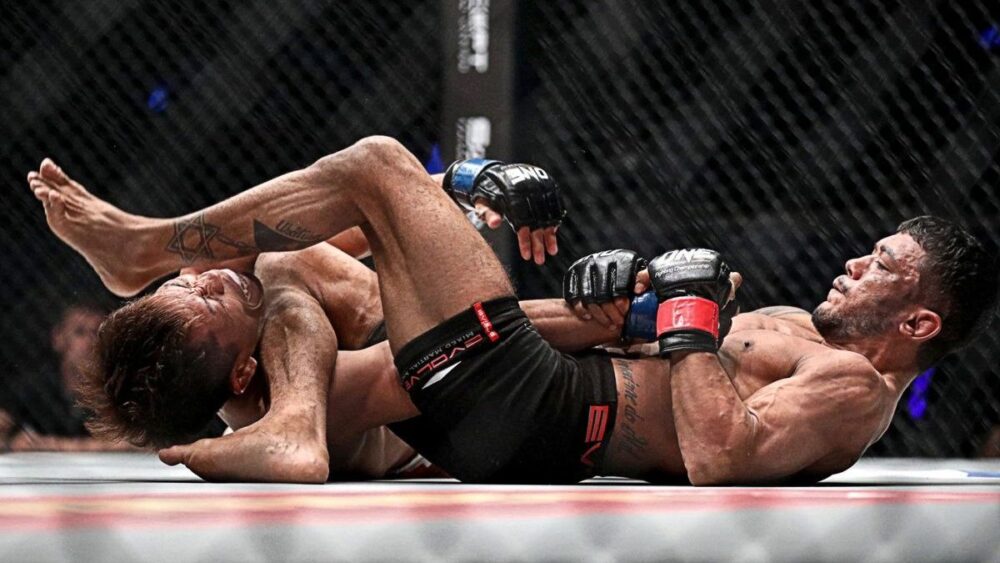 Mixed Martial Arts allows fighters to use techniques from a wide range of martial arts, making it one of the most entertaining sports in the world. Brazilian Jiu-Jitsu specialists dominated the early days of mixed martial arts, but wrestlers and strikers eventually figured out how to compete with them.

BJJ fighters are not as dominant in mixed martial arts these days, but submissions remain helpful tools that can end fights at any moment.

The Most Used Submissions In Mixed Martial Arts

A mixed martial arts contest is the closest thing to real fighting in sports. MMA allowing for a wide range of techniques makes it the perfect environment to test out which BJJ submissions are most effective. Here are some of the most used submission holds in MMA:

This is the one choke every martial artist should be familiar with. It is the most used submission in mixed martial arts, a testament to its effectiveness. Known as the “Mata Leão” in Brazil, which translates to “lion killer,” the rear naked choke is one of the most challenging chokes to escape from, and you can effectively use it against much bigger and stronger opponents.

If your opponent is silly enough not to tap, they’ll be unconscious within 5 to 20 seconds. It’s a blood choke that cuts off the blood to your opponent’s brain by blocking the ceratoid artery, forcing them to lose consciousness quickly.

The rear naked choke also happens to be one of the easiest chokes to learn, and it’s typically applied from top back mount.

To perform a rear naked choke:

Here’s another easy choke that also happens to be highly effective. It’s a Judo technique – called Mae Hadaka Jime – that was popularized by BJJ players. It’s an air choke that works by compressing your opponent’s windpipe, preventing them from breathing. Some variations of the technique also cut off the blood supply to the brain.

The guillotine choke is one of the easiest submissions to secure in mixed martial arts or self-defense scenarios since untrained fighters and even professional MMA fighters often get careless with their heads when shooting for takedowns. Experienced wrestlers also have this terrible habit since chokes like the guillotine aren’t an issue in wrestling.

Shoot in recklessly against someone who knows how to secure the guillotine choke and you’ll be in serious trouble before you even realize what’s happening.

To perform a guillotine choke:

The armbar is one of the first submissions BJJ students learn, but it’s also one of the hardest to master. You’ll have to drill this move relentlessly to be good enough to pull it off against resisting opponents consistently.

The armbar is a joint lock that puts pressure on the elbow joint. It’s a technique you should be very careful with since it can damage the elbow joints when fully applied. When set up correctly, armbars are very difficult to escape from, and the technique can be combined with a triangle choke to give your opponent multiple things to worry about.

The armbar can be applied from many positions, making it a handy tool to have in your fighting arsenal. Armbars can be executed from guard bottom, side control, knee on belly, mount, and top back mount. You can even pull off a flying armbar from standing position or while slamming your opponent. ONE Championship flyweight champion Demetrious “Mighty Mouse” Johnson shocked the world when he pulled off one of the most impressive armbars in MMA history on Ray Borg.

The most straightforward way to secure an armbar is from top mount position. Your opponent might extend their arms to push you off or block strikes, giving you what you need to pull off the technique.

Here’s how to perform an armbar:

The arm triangle is another simple submission that’s effective in mixed martial arts and self-defense situations. People who have longer arms often have the most dangerous arm triangle chokes since they have an easier time wrapping their arms around their opponents’ heads.

The arm triangle works similarly to the conventional triangle choke applied with the legs. It involves trapping one of your opponent’s arms and head, forming a triangle shape with your arms that restricts blood flow to your opponent’s brain.

The arm triangle can be performed from a variety of positions like half guard, mount, side mount, bottom guard, and standing.

The arm triangle works by wrapping one of your arms around the back of your opponent’s head and locking up the choke with your other hand.

Here’s how to pull off an arm triangle from side mount guard:

Taking Time Off Martial Arts Training: How Long Is Too Long?
The 4 Most Common Striking Styles Found In MMA
Single Leg Takedown Vs. Double Leg Takedown Debate
5 Reasons Why Muay Thai Is An Excellent Base For MMA
Transitioning Into MMA From A Boxing Base
Transitioning Into MMA From A BJJ Base
5 Techniques Every MMA Fighter Must Know
How Important Is Nutrition For Martial Artists?
How To Transition From Training In MMA To Becoming A Professional Fighter