What Is Sprawl And Brawl In MMA? 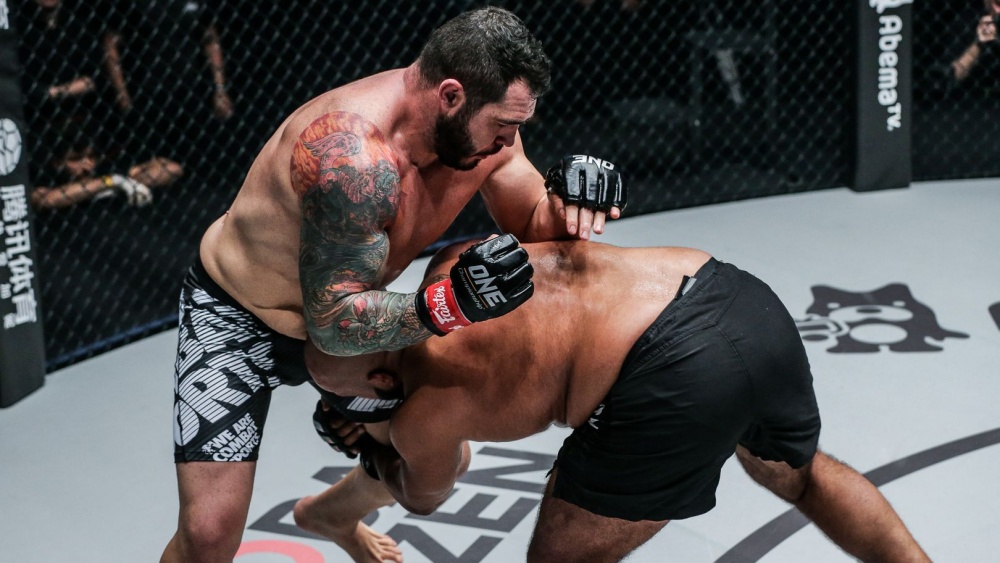 The sprawl and brawl is one of the first fighting styles to emerge in the early days of mixed martial arts. It was developed to counter grapplers and their domination inside the cage.

The first few MMA tournaments made it clear grapplers have a significant advantage against strikers. Led by Royce Gracie, grapplers dominated the early days of MMA, with Gracie winning three of the first four UFC tournaments. Most people had no idea of what submissions were at that point, making it impossible for them to defend themselves against seasoned grapplers.

The message was sent loudly and clearly. Put an experienced grappler with no striking experience in a cage with a striker with no grappling experience, and the grappler will emerge victorious most of the time. It’s why military special forces and law enforcement still strongly favor grappling-based martial arts like Brazilian Jiu-Jitsu and Judo over striking-based combat styles in their training curriculums.

The Emergence Of The Sprawl And Brawl

Fighters from striking-based martial arts quickly noticed they had some significant holes in their games once mixed martial arts provided a platform to test the different styles against each other. Wrestlers didn’t like being on the ground with submission specialists either since they often found themselves getting caught in their chokes and joint locks.

The first solution developed to counter grapplers (specifically BJJ specialists) was the sprawl and brawl.

Brazilian Jiu-Jitsu is known for its countless submissions and how comfortable its practitioners are when their backs are on the canvas. BJJ players are also known for their crushing top games. The apparent weakness that BJJ players had in the early days was their limited takedowns.

This comes down to how BJJ players train. Learning BJJ typically involves rolling (sparring) after each class. This is one of the reasons why BJJ players are so good at submitting and controlling resisting opponents. They get lots of practice over the years.

However, BJJ gyms typically teach students to start their rolling sessions with their knees on the ground. This is done to ensure that most of their sparring time is spent on the ground practicing BJJ instead of spending the entire session trying to take each other down. It also protects against injuries since takedowns have more inherent risk than trying to drive a person to the ground while you’re on your knees.

It’s a weakness that you might not notice when you observe BJJ players going against strikers, but it becomes apparent when they’re matched up against solid wrestlers who know how to stop takedowns.

The Father Of Sprawl And Brawl: The Gracie Hunter

The most influential MMA fighter from Japan, Kazushi Sakuraba, was one of the first to showcase the effectiveness of the sprawl and brawl tactic. An accomplished wrestler, Sakuraba put Japanese MMA on the map while fighting under the Pride Fighting Championship banner.

He earned his legendary status by defeating members of the most popular family in mixed martial arts: the Gracie family.

It started with a fight against Royler Gracie at Pride FC. The fight was advertised as a showdown between a BJJ World Champion and an accomplished wrestler. Sakuraba used his wrestling to nullify Royler’s takedown attempts, forcing a standup battle. Royler eventually secured a takedown, but Sakuraba locked in a kimura, leading to a controversial stoppage. This started the rivalry between Sakuraba and the Gracies.

Sakuraba went on to face the legendary Royce Gracie at the first Pride Grand-Prix, and his sprawl and brawl approach proved to be effective once again. Royce choosing to wear his gi for the fight only made things easier for the Japanese fighter. The fight lasted 90 minutes before Royce’s corner threw in the towel.

Sakuraba went on to defeat Renzo Gracie and Ryan Gracie before losing his rematch to Royce Grace. Both fighters were way past their prime for the rematch.

Still, Sakuraba’s success against the Gracie’s in his prime proved sprawling and brawling was an effective tactic. Other fighters like Quinton Jackson and Chuck Liddell become MMA world champions using similar tactics.

Some important things you should know about using the sprawl and brawl tactic include:

1) Sprawl And Brawl Fighters Are Better Grapplers Than You Think

Spawl and brawl fighters are often called strikers, but that is usually not their base. Many MMA fighters who successfully use the tactic come from wrestling backgrounds like Sakuraba.

Having good takedown defense is the very minimum you need to use the tactic, but what you really want is a well-rounded ground game. You want to be good at scrambling and popping back up when taken down. You also want to be able to defend against submissions in case you get caught in something while scrambling.

Wanting to keep a fight standing means you expect to get the better of the striking exchanges. If your opponent ends up being a better striker than you are, you’d be better off taking the fight to the ground. That’s why we stress working towards being a well-rounded grappler.

For example, UFC heavyweight champion Francis Ngannou typically uses sprawl and brawl tactics, but he used takedowns to win rounds when he defended his belt against a better striker in Cyril Gane.

Attempting takedowns uses up a lot of energy, and so does defending against them. You make your opponent work more with every takedown successfully stuffed, but they also get to wear you down with every completed takedown. Getting taken down means you have to use energy to get yourself back up.

Having good cardio increases your odds of controlling where the fight takes place. You want your opponent to get tired from attempting takedowns before you’re exhausted from defending against them.

A Beginner’s Guide To MMA Sparring
Taking Time Off Martial Arts Training: How Long Is Too Long?
The 4 Most Common Striking Styles Found In MMA
Single Leg Takedown Vs. Double Leg Takedown Debate
The Most-Used Submission Holds In MMA
5 Reasons Why Muay Thai Is An Excellent Base For MMA
Transitioning Into MMA From A Boxing Base
Transitioning Into MMA From A BJJ Base
5 Techniques Every MMA Fighter Must Know