Clinching is a huge part of mixed martial arts, and you can get a lot of work done from that position. A clinch is often the result of closing the distance during a fight. Understanding how the clinch position works can put you in a position where you can land devastating strikes on opponents while they can’t return the favor.

Clinching can also serve as a precursor to takedowns. Grappling martial arts like Greco-Roman wrestling and Judo have a myriad of techniques executed from the clinch.

How to fight in the clinch in MMA

The key to having success in the clinch position is using the correct techniques. One little mistake like your elbows being too far apart while clinching allows your opponent to secure a more dominant position in the clinch or escape.

Here are some simple tips that will make it easier for you to dominate opponents while clinched: Head control is everything when it comes to dominating the clinch. Control your opponent’s head, and it becomes significantly easier to control the rest of their body.

Keeping your head far away from your opponent while clinched leaves you exposed to dangers like hooks and elbows from the defender. Placing your head right above theirs protects you from these attacks while putting you in a position to land knees on your opponent.

Elbow positioning also plays a huge role when it comes to controlling opponents in the clinch. Flaring out your elbows makes it easier for an opponent to close the distance and wrap their arms around your body. 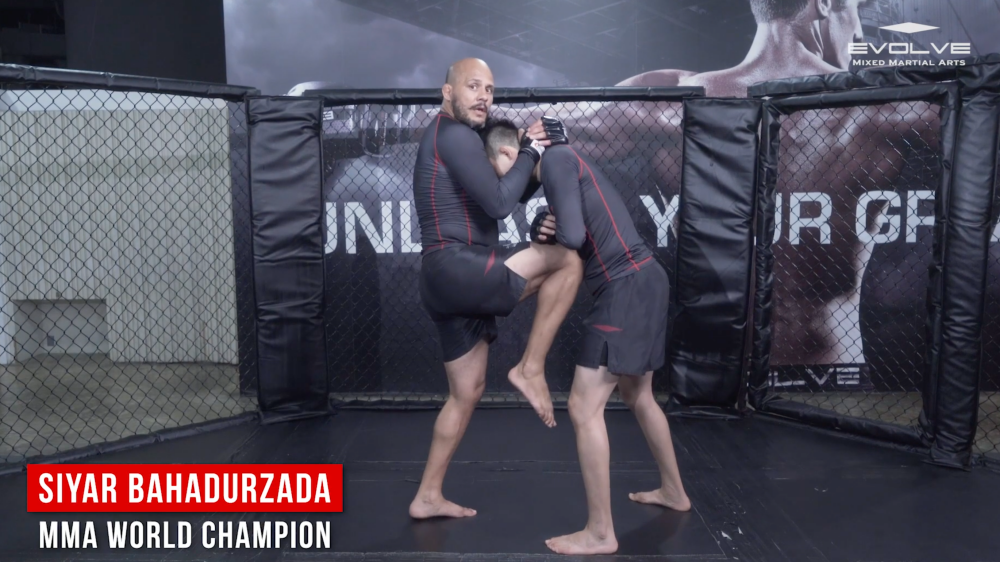 There is no need to obsessively try to knee an opponent in the face when you’ve secured control in the clinch. Knees are arguably the most powerful attack a person can throw, and they do damage regardless of where they land. A knee to the body can end a fight just as quickly as a knee to the head.

Anderson Silva proved that during his light-heavyweight battle against Stephan Bonner, putting him away with a vicious flying knee to the sternum.

Besides, landing knees to the body opens up attacks to the head. It only takes one or two knees to get your opponent to shift their defensive focus to protecting their body.

When throwing knees from the clinch, the knee you’re attacking with should touch your other leg while going up. This makes the technique more effective since most of the impact of the blow goes into the opponent’s body if they keep their hands in position to block it. Failing to keep your legs close to each other when throwing a knee increases the odds of the strike landing on the opponent’s elbows. Keep your techniques tight, and alternate between body and head strikes for maximum effectiveness in the clinch.

3) Use the Muay Thai whip Adding the Muay Thai whip to your arsenal makes you even more devastating in the clinch position. The average MMA fighter has trained how to block strikes in the clinch, and they might end up effectively blocking your knees after you’ve thrown a few. Whipping your opponent allows you to reset the position and disorient your opponent.

To execute a whip. Move your back foot forward, placing it right next to the opponent’s lead foot. Change your grips on their head, using one hand to grab the back of their neck while the other grabs their head. Now whip your opponent around, using the grip you have on their neck as leverage. Some clinching positions like double-underhooks, over-underhook, and double-overhooks are better suited for grappling. Grapplers commonly use these positions as they work to take their opponents down.

Learning how to transition from such positions to clinch positions better suited for striking can serve as a form of takedown defense. It also puts you in a position to land strikes that chip away at your opponent or even end the fight.

One of the most common positions MMA fighters might find themselves in is the over-under position. Here, one of your arms is under your opponent’s hand, while the other goes over them. It is a neutral position since neither fighter has a clear advantage from there. Transitioning to double-underhooks put you in a better position for a takedown, and you can use your overhook to transition to a striking clinch.

To execute the transition, work your overhook as deep as you can, using it to keep your opponent’s arm close to your body. The arm you’re using for your overhook should be deep enough to almost touch your opposite armpit.

Grab your opponent’s wrist with your other hand, preventing them from defending or attacking with it. From this position, you can start working knees to your opponent’s body. Time your knees well, and don’t go crazy with them since a skilled opponent can catch one and use it to complete a single leg takedown.

You can also advance to a striking clinch using your underhook. You bring your opponent in tight with your underhook, grabbing their shoulder with your hand. You isolate their other hand with wrist control and start working in your strikes.

5 Ways To Use The Jab In MMA