Here’s How To Develop A Well-Rounded Game In BJJ 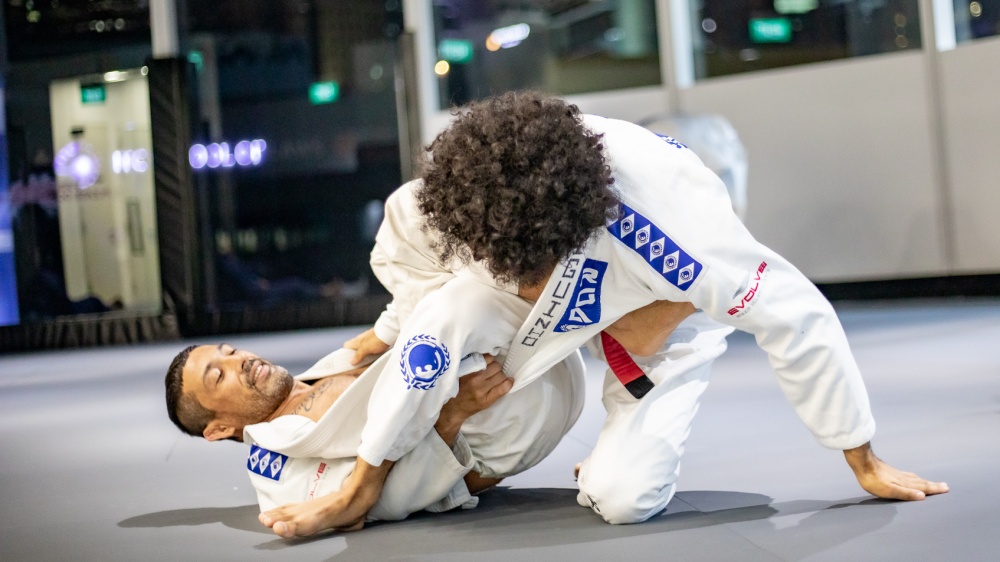 Having a well-rounded game in Brazilian Jiu-Jitsu means knowing how to grapple wherever the fight goes. It means that a good grappler should understand the fundamental concepts of fighting (distance, speed, leverage) and can easily transition from standing to ground-based exchanges. This article will talk about concepts that will help you develop a well-rounded game in BJJ.

What Is A Well-Rounded Game In BJJ?

The further you go in BJJ, the greater the emphasis should be on developing a fundamental game in each major position. Rickson Gracie mentioned that a blue belt must be well-rounded enough to fight comfortably from top to bottom positions. This means that the higher you rank in BJJ, the more complete your game should be.

If you’ve been training in Brazilian Jiu-Jitsu for a while, you might have noticed that the first few months of training were mostly all about pin escapes, passing, and playing the guard. While groundwork is definitely the bread and butter of BJJ, it is also essential to know how to grapple from a standing position.

In the early development of BJJ in Brazil, some practitioners trained less in standup positions because there was limited space to train. It was not common to train in large facilities back in the day. This makes training in wrestling difficult, especially if it’s a packed training day. This is not to say that all grapplers did not develop their standup game back then. Many fighters cross-trained in Judo as it was, and still is, a popular sport in Brazil as well.

As BJJ continued to develop, the standup game has solidified its importance both for sport BJJ and MMA/ self-defense. In a match where grapplers are both equally physically conditioned, the grappler with the more complete skillset will most likely win. After all, it is easier to be victorious if you have fewer holes in your game compared to your competition.

A grappler who knows what to do in the clinch, how to shoot, defend takedowns, understands the concepts of playing and passing the guard, is keen with submissions from any position, and knows how to escape bad positions should the situation calls for it, is what we can call a well-rounded grappler.

Develop A Well-Rounded Game In BJJ

Becoming a well-rounded grappler takes significant time and dedication, but it can be achieved step by step. It is important not to waste every training session: you must have a goal that you want to achieve every time you step on the mat.

John Danaher is a big proponent of this – he emphasizes that Kaizen is one of the critical steps in becoming a better grappler. To define, Kaizen is the principle where you look for continuous improvement. Try to achieve small things gradually; it will compound over time and make you better overall. Becoming a well-rounded grappler doesn’t happen overnight.

The following are the things to consider for developing a well-rounded game in BJJ.

One of the fundamental principles of grappling is knowing how and when to take the fight to the ground. BJJ practitioners often neglect training standup positions for various reasons, such as injury, age, and being a more sports-specific competitor.

The reality is while pulling guard may be easier sometimes, it is not ideal for self-defense. Challenge yourself by learning a takedown or two, as it will make you a better guard passer as well. Some competitions even penalize butt scooting without initial grips.

A standup fight includes more than just throws or takedowns. As much as some BJJ practitioners neglect training takedowns, grip fighting is the first exchange that happens before you can successfully perform a throw. Learn basic grip fighting concepts to control your opponent. This includes breaking the opponent’s grip and applying yours to set up a takedown.

For defensive purposes, employ stiff-arming tactics toward an aggressive opponent to prevent him from pressuring forward. Grappling in the clinch is also crucial to learn to close the distance and apply your throws or trips.

The emphasis on the guard separates BJJ from other grappling martial arts. A BJJ practitioner should be efficient in at least one type of open guard and a closed guard. The guard may be the first thing you learned in BJJ, and it is essential to continuously develop it.

Choose the type of guard that favors your frame and personality. Considering these factors, if you are an aggressive grappler with a short femur, you may find the butterfly guard in your favor. One of the strongest open guards, the butterfly guard can easily be used to sweep the opponents to gain top control. Exploring guards such as the De La Riva and spider guard may benefit you if you have long legs.

It is important to also practice guard recovery drills. Guard retention can go a long way and is one of the reasons why some grapplers are difficult to pin even after passing through their legs.

3) Learn How To Pass The Guard

There are different ways to pass different guards in BJJ. According to John Danaher, guard passing plays a significant role in a complete Jiu-Jitsu game. To him, the best way to pass the guard is to force the half guard.

In most guard passes, the idea is to first pin the opponent’s hips and slowly work up to pin the shoulder and the head to complete the pass. The half guard is the exception to this, as it allows you to directly control the head before passing, giving you greater control over the opponent.

Even though there are many types of guards in BJJ, it is critical that you put yourself in different guards and develop at least one guard pass for each position, or as John Danaher said, force the opponent to the half guard.

It is essential for grapplers to learn how to escape inferior positions, as it will give you the confidence to go for submissions. If you somehow ended up in a pin, knowing that you can escape easily can be very helpful.

Apart from that, it also prevents injury and gives you more time to improve your technique. Spending some rounds in bad positions will benefit you when the situation calls for it. A well-rounded grappler should not only be good with offense but in defense as well.

Understand that having a well-rounded BJJ game takes time. It is necessary to give definite attention to your weaknesses and the other lagging parts of your game to build a base for every position. It is a good idea to have at least one to three attacks/defenses in every major position so that you can cycle through them without any issues.