The De La Riva Guard is one of the most popular open guards in Brazilian Jiu-Jitsu, and one of the trickiest ones to pass. There are plenty of options for sweeps, submissions, and back-takes for the guard player. The De La Riva hook will also limit the top player’s mobility, even if they are retreating or backing up. The bottom player will mostly be in constant offense, as resting while playing the De La Riva may open up opportunities for the top player to break their critical grips.

There are numerous ways to pass the De La Riva Guard, and some passes will depend on where the opponent is gripping. It is always best not to let your opponent get a deep collar grip, and if they do, always break their grips as soon as possible to avoid them breaking your posture.

In the video above, Professor Gamal shows us one of the most effective ways to pass the De La Riva Guard. 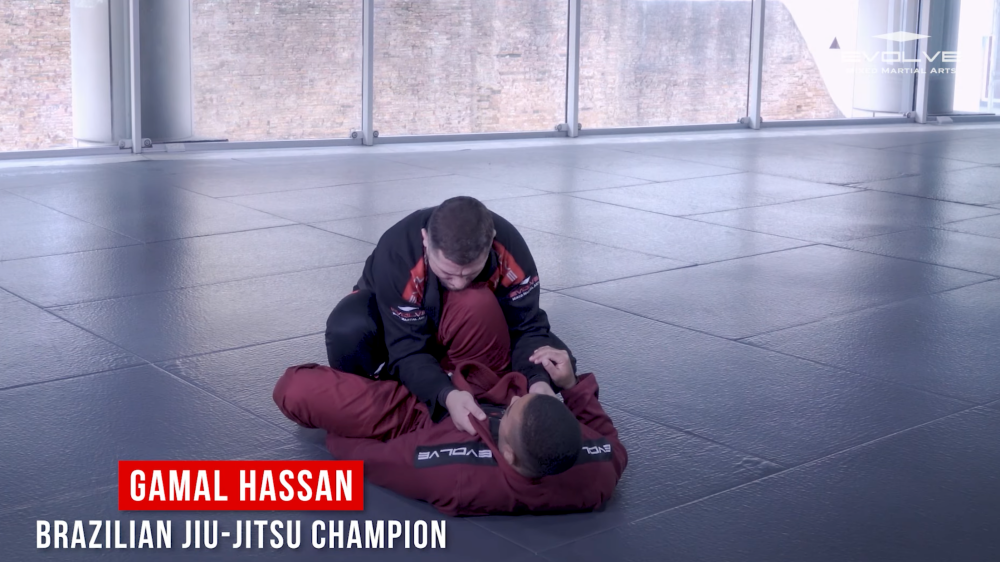 While there are plenty of options for sweeps and submissions, most De La Riva Guard players will try to expose and attack your back by putting pressure on the side of your knee with their De La Riva hook. Going to the headquarters position limits the effectiveness of their De La Riva hook and minimizes the risk when you finally start attacking.

The headquarters position involves unhooking your opponent’s De La Riva leg and placing their free leg between both of your legs. Squatting down on the free leg will reduce your opponent’s ability to create momentum to shift your center of gravity.

• From inside your opponent’s De La Riva Guard, make sure that your hips are facing your opponent as squarely as possible. Lower your stance by bending your knees.

• Address your opponent’s De La Riva hook by pushing their knee down with your hand on the same side.

• Point your knee to the outside to take out their De La Riva hook on your leg.

• From here, squat down and concentrate your center of gravity on your opponent’s free leg.

• To stop them from creating space, make a grip on the collar with both your hands (same-side collar) and pull them in. Keep your forearms parallel to each other. This will create a massive amount of pressure and will greatly reduce their mobility.

• You are now in the headquarters position and are ready to start your pass. From the headquarters, you will have a few ways to pass, such as the knee slice, x-pass, and the side smash (smash pass). If the opponent still manages to maintain his grip on your leg even after you have taken out their De La Riva hook, the side smash would be the best type of pass as it addresses this grip.

• From the headquarters, use your upper body to guide your opponent’s trapped leg towards the side.

• As you smash their leg to the side, their grip on your other leg will automatically break due to pressure.

• Place all your weight on the smashed leg and grab their belt with your hand. This will torque their hip to the side while their upper body stays flat on the mat.

• Place both of their legs between your legs by sprawling out.

• You are now in the side smash position

• From the side smash, you can push either of their knees down and walk towards side control. • From the headquarters position, advance your knee (previously trapped DLR knee) through your opponent’s guard and drive it towards the mat.

• Your opponent will usually end up in a knee shield type of guard.

• From your opponent’s knee shield, insert your knee (free leg) between their legs to land in the dope mount.

• Put a cross-face on your opponent so that their hips are twisted to one side while their head is facing the other.

• Sprawl out and you will automatically land in side control. The last option showed by Professor Gamal is a knee cut from the headquarters. This pass is also a good option if the opponent does not let go of their grip on your leg.

• From the headquarters position, underhook your opponent’s leg and grab their collar as if going to a stack pass.

• Step lateral to the side of the previously free leg and bring your cross knee on top of their thigh to establish a knee cut.

• The position will look like a combination of a knee-cut and a stack pass as you will still be maintaining the underhook control on the other leg.

• While still maintaining both grips on the collar, advance forward with the knee cut to finish in side control.

The headquarters position is one of the best “staging areas” to start your attacks when your opponent has a De La Riva Guard. It leaves you relatively safe from submissions, and the sweep options that they have are much more limited. Most of the passes discussed in the video are slow and grinding passes. You will need to be patient to make sure that constant pressure is applied. Never give them an inch to move, and if they are able to create space, address those by applying more pressure.