Nong-O Gaiyanghadao is a Muay Thai legend and a member of the prestigious Evolve Fight Team. He’s also the reigning ONE Bantamweight Muay Thai World Champion.

Throughout his career, Nong-O has faced many of the best fighters in history, competing at the highest level of the sport for many years. One of the reasons Nong-O has been so successful in his career is because he is such a technical fighter. Every slight movement has its purpose and is designed to achieve a specific result.

Hearing Nong-O explaining the science behind his striking is an absolute treat. You can dive right into his incredible mind and discover his thought process. It’s evident that Nong-O is one of the most intelligent fighters in Muay Thai.

One of Nong-O’s most effective techniques is his signature sweep. The way the Thai legend smoothly executes his signature sweep in a four-step combination is nothing short of masterful. In the video above, Nong-O explains every nuance to the technique in detail, teaching students how to execute the sweep to perfection.

If you’re looking to diversify your Muay Thai striking, integrating Nong-O’s signature sweep into your arsenal will add a whole new dimension to your striking. Let’s learn from the master himself. 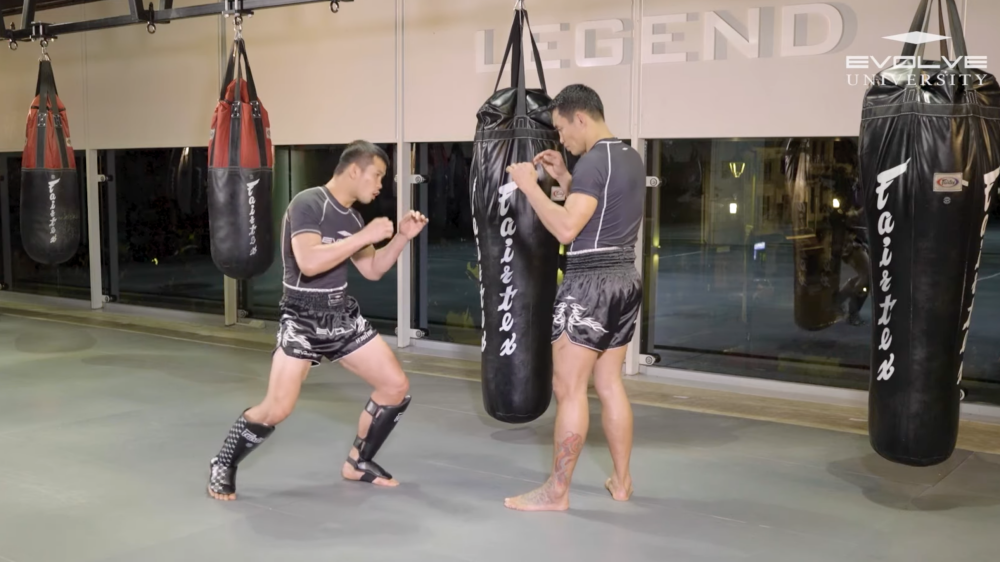 The first step to Nong-O’s signature sweep is using a feint to confuse an opponent, in this case, you’ll be feinting with a body kick. The objective here is to get the opponent to raise his leg to block the kick.

Now, in order for this feint to be effective, you have to mix your feints with actual hard body kicks. The only way to really sell a feint is by getting your opponent’s respect with the actual thing. Once you start getting your opponent to bite on the feint, and you’re getting that desired reaction, this technique’s effectiveness increases significantly.

If after you feint with the body kick, your opponent throws a push kick, you can simply move back and avoid it. But once you see your opponent raise his leg to block, that’s when you can move on to the next step in this combination.

2) Step in and close the distance Pay attention to your opponent’s chest and shoulders, and how he moves them. From these indicators, you can tell if your opponent will raise his leg to try and block the body kick feint. When the opponent raises his leg to block the feint, it will be easy to move in close and sweep him.

Once your opponent raises his leg, the next step is to quickly close the distance. You need to step in quickly to the front of your opponent, your lead left knee right between his legs, followed by the rear right leg in a fast and smooth motion.

This step is very important because if you don’t step in to get close, you’ll be out of range and it will be hard for you to execute the next two steps in the combination; which is to swipe at the opponent’s knee and perform the sweep.

Furthermore, the feint and the step-in have to be executed in smooth succession. You need to be quick and precise, to maintain the element of surprise. After completing the step-in, it’s time for the next phase of this combination. These final two steps have to be done almost simultaneously, although they are separate parts.

With the opponent’s knee raised to block the body kick, and after you’ve stepped in between his legs, use your left hand to swipe the knee, pushing it to your left. You must then immediately grab your opponent by his chest, shoulder, or neck, and push him down as you execute the sweep. When swiping the knee, use your right hand to push and sweep at the same time, and your opponent is almost guaranteed to fall.

One common mistake in executing this technique is swiping too high with the left hand that it almost hits the opponent’s thigh. What you want is to swipe from the knee or lower, so it will cause your opponent to become off-balance. Swiping too high will make the technique ineffective, and your opponent will not lose balance. You need him to lose balance, so you can push him down and sweep him easily.

Another mistake is not kicking as you swipe and push the opponent at the same time. It must be one comprehensive and smooth motion. You can’t wait until your opponent plants his foot because by then, your opponent will be stable and he can actually counter you with a knee or a kick. The final part of the equation is sweeping the support leg. Remember, this must be done simultaneously with the swipe and push.

Sweep your opponent to the left as you push his chest down with your right hand. This creates a counter-balance that will literally cause him to topple to the ground. Sweeping the leg is already an effective technique in Muay Thai, but when you combine it with pushing down on the chest, it’s almost unblockable. Your opponent will easily fall.