Striking Against The Cage In MMA

The cage has emerged as the standard platform for mixed martial art competitions. It’s an interesting turn of events since there was no standard during the early days of MMA. The Ultimate Fighting Championship popularized the cage, while rival organizations like PRIDE FC used a boxing-style ring.

The cage has become the most popular platform these days, and it is used by the most successful promotions like the UFC, ONE Championship, and Bellator.

The way things have turned out isn’t that surprising since fighting inside a ring sometimes led to awkward moments like a fighter falling out of the ring or the referee pausing the fight to move fighters back to the center of the ring.

Fighting against a cage does not create these issues, and it led to a new aspect of MMA: fighting against the cage. The cage can be used for defensive and offensive purposes. It makes it easier to stuff takedowns since it holds up some of your weight, and you can use it to work your way back up from the ground or to trap your opponent in your clinch. From a scoring standpoint, the fighter who has their back pinned against the cage is losing the fight.

Making your strikes more effective against the cage

Cage fighting is like grappling while standing up. Here are some tips that will make your strikes more effective when you have an opponent pinned against the cage: Just as is the case with ground fighting, you won’t be able to get powerful strikes off if you don’t establish control over your opponent’s body.

2) Use the proper attacks 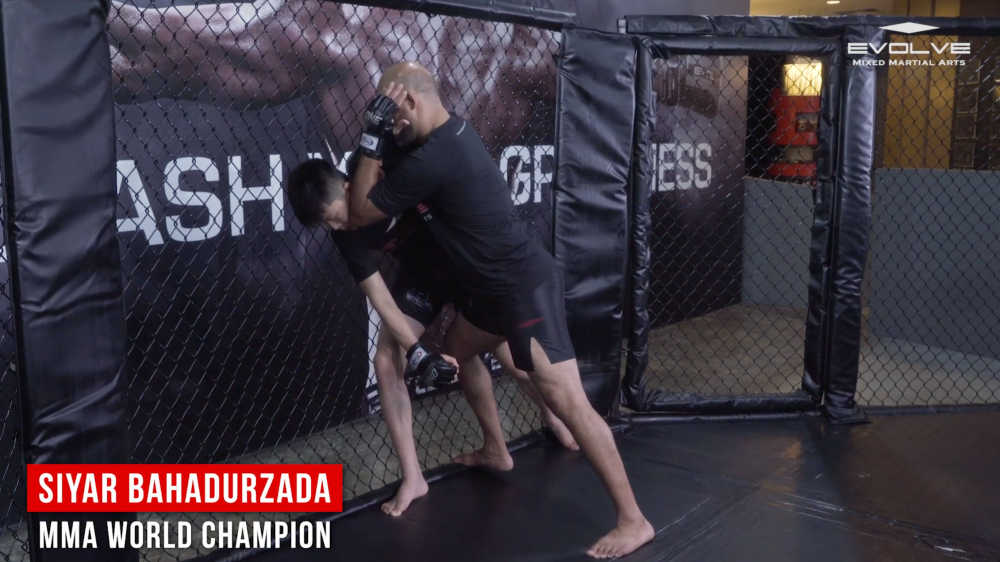 While it might be tempting to throw punches at your opponent when you have them pinned against the cage, knees and elbows tend to be the most effective attacks when fighting against the cage. You can throw these techniques without giving up much of the control you have established.

Knees are the more effective technique when you haven’t broken your opponent’s posture down. A solid knee to the body is often enough to make most people curl up to defend themselves. That opens up an ideal position to throw an elbow. Horizontal elbows aren’t as effective from clinch striking positions since the angle prevents you from generating momentum from your lower body. Upward elbows are the more effective technique since they allow you to put your legs and hips into the motion.

As is the case with ground striking, every strike you throw gives your opponent a chance to escape since you have to create space. Mix up your attacks so you don’t become predictable. Remember to return to your initial control position after every barrage.

The double-collar clinch can be very effective against the cage. It opens your opponent up to devastating knees to the face, and it forces them to carry your body weight.

To execute a double-collar clinch, grab the back of your opponent’s head with one hand and use your other arm to grab the first hand. Next, pull their head in towards your chest, breaking your opponent’s posture down. Place your chin over their head, using your head to put more downward pressure on your opponent. Your elbows should be close to your body to strengthen your hold on their head. Keeping your elbows far apart creates an opening your opponent can use to escape. It’s actually one of the ways to escape from the position. The person on the wrong side of the clinch pushes on the other person’s elbow away from their body, creating space they can use to escape.

Once proper control is established in the double-collar clinch position, you can start throwing knees at your opponent’s head. You can also work in upward elbows from the position. Just remember to time them well and return to full control after every shot.

Your opponent will likely try everything they can think of to get away from you in the clinch. If you’re about to lose control, focus on keeping your opponent’s head down so you can land one last knee as they try to escape. You might be able to catch them off guard, possibly bringing the fight to an end. As we mentioned earlier, pinning your opponent’s back against the cage scores points for you on the judges’ scorecards. You gain valuable control time that can score the round in your favor if everything else is even. It’s no different than keeping an opponent pinned against the ground. You score points for simply keeping them in a vulnerable position.

That doesn’t mean you should just clinch your opponent against the cage and stay there. Just like a referee might stand both fighters up due to inactivity when on the ground, they can do the same when you’re in a clinch.

Take your time, but stay busy enough to keep the referee off you. Don’t start unloading a barrage of strikes unless you’re sure your opponent is hurt since that gives them opportunities to escape. Throw a few shots, control your opponent, then throw some more. Ideally, you want to unleash your attacks when your opponent least expects them.