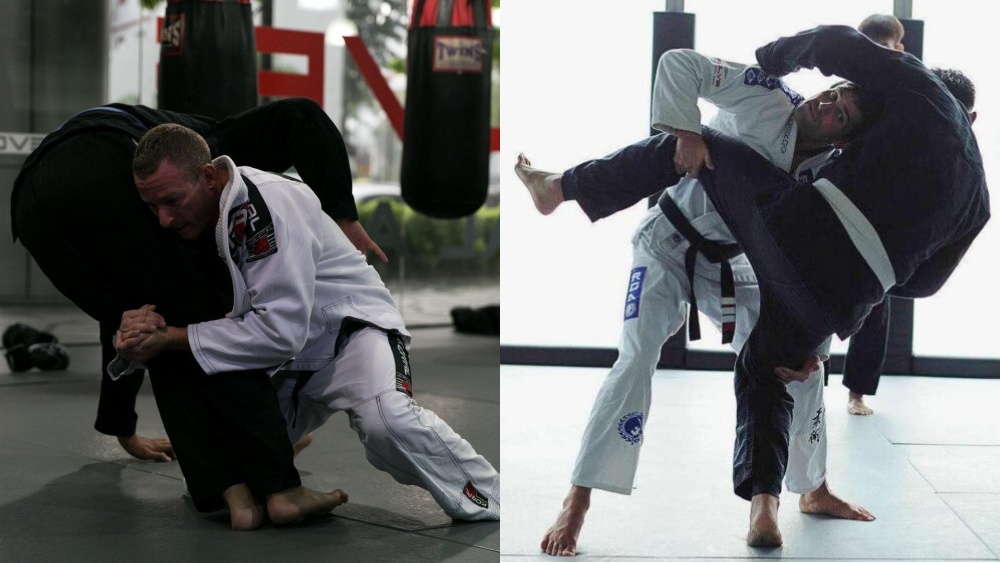 A successful grappler is someone who has the ability to fight on all planes of combat. While most BJJ matches, more often than not, go to the ground, the start always begins standing up. It is, therefore, important to be competent with throws and takedowns so that you can be offensive as soon as a match starts.

The good news here is that there are a lot of options you can choose from to build a solid standup game. Today we’ll talk about two of the most widely used takedowns you can do: the single and double leg takedowns.

The Best Bang For Buck Techniques You Can Learn

The single and double leg takedowns are some of the most versatile techniques you can execute to take someone down. All that’s required is to grab a leg (or two), and you’re on your way to completing the technique. These takedowns are applicable in most grappling rulesets and don’t depend on grabbing the opponent’s uniform. This means that these are must-learn techniques if you train in submission grappling and mixed martial arts.

If you think about it, most of the world’s best fighters have excellent single leg and double leg takedowns as part of their games. Fighters from lighter weight classes up to heavyweights must have the ability to take their opponents down; otherwise, they greatly limit their offensive repertoire.

Joe Rogan has repeatedly mentioned that good wrestling, or at least a strong takedown game, is perhaps the best base for MMA, as you can dictate where the fight goes. Taking someone down at will ensures that you dominate the scorecards and forces your opponent to stay on the defensive. Once you pin your opponent on the mat, gravity is on your side, making advancing to better positions much more straightforward.

The single leg takedown is one of the first takedowns you’ll learn in your BJJ journey. The single leg is a great technique because it can be applied from many setups, but the basic premise stays the same.

In this video, BJJ black belt Nick Albin demonstrates the basic single leg takedown with the gi. Start by establishing a straight grip on the opponent’s lapel. The side where you grip should be the opposite side of the leg you’ll attack.

Use your other hand to monitor any grip attempts while you step at an angle to make them step forward. Shoot on the target leg once you see the step, and maintain the lapel grip as much as possible. Finish the takedown by lifting the leg as you drive forward.

The double leg takedown is another basic takedown you’ll learn early on. In this video, Shintaro Higashi shares his approach to the technique. Shintaro mentions that removing the lines of defense (arms, head & hips) is critical before attempting the takedown.

Once you remove the defense, it’s time to take a penetration step and grab near the knee. Use your head to post on the opponent’s side and drive in that direction as you lift the opposite leg. To finish the double leg takedown, you can lift and throw or dump as you go at an angle. Both are solid and effective options.

If we are to identify the main benefit of the single leg takedown, it is the fact that it requires fewer criteria to pull off the technique. As the name suggests, grabbing one leg is enough to threaten the takedown. Of course, there are requisite steps before and after grabbing the leg, but the very essence of the single leg is to grab a leg and take the opponent down.

Another thing to think about is the athleticism of the athlete. The single leg is much easier to do as it does not require a lot of athleticism. It is a technique that even older grapplers can use to great effect.

The double leg takedown, on the other hand, is another powerful tool because a couple of those can instantly sway the momentum of a match. The double leg is a significantly higher impact takedown than the single leg, and a well-placed takedown can stun someone instantly.

In many ways, the double leg is similar to Judo throws in terms of damage. It is a technique that requires more athleticism as you need to get close to the opponent’s center of gravity, grabbing both legs. If your body can take the strain of the move, then, by all means, include the double leg takedown in your arsenal.

Both have lots of utility and have been used in many grappling styles worldwide. Understand that, as with all techniques in BJJ, it all boils down to the practitioner’s style and grappling philosophy.

The single and double leg takedowns are guaranteed to level up your game. If you are new to BJJ, it is a must that you at least explore these techniques. These techniques are helpful at all levels and will help you progress to your next rank.

Drilling is always an important aspect when learning techniques, especially takedowns. Make sure to drill with learning in mind, and don’t be afraid to take it slow in the beginning stages. Slowly add resistance as you become more experienced, and drill on both sides if you can. Also, we suggest you start your rolls standing up to include these takedowns in your training sessions. Get your reps in; we are confident you’ll get better in no time.

Note that this post’s purpose is to talk about the differences between the techniques. We encourage you to train both so that you understand the nuances of the two, and from there, look at ways on when to use them based on how you approach Jiu-Jitsu. As we said before, building your personal game is entirely up to you. Everyone’s game is unique, and your selection of techniques should come from a place of sound judgment.

5 Of The Best Judo Techniques For BJJ

Taking Time Off Martial Arts Training: How Long Is Too Long?
The 5 Most Popular Takedowns Used In BJJ
Get Past Your Opponent With These 4 Essential BJJ Guard Passes
Ten Common Mistakes BJJ Newbies Make
How To Escape A Heel Hook
BJJ Conditioning And Endurance: Building Your Stamina
5 Of The Best Judo Techniques For BJJ
Transitioning Into MMA From A BJJ Base
How Important Is Nutrition For Martial Artists?

Taking Time Off Martial Arts Training: How Long Is Too Long?
The 4 Most Common Striking Styles Found In MMA
The Most-Used Submission Holds In MMA
5 Reasons Why Muay Thai Is An Excellent Base For MMA
Transitioning Into MMA From A Boxing Base
Transitioning Into MMA From A BJJ Base
5 Techniques Every MMA Fighter Must Know
How Important Is Nutrition For Martial Artists?
How To Transition From Training In MMA To Becoming A Professional Fighter