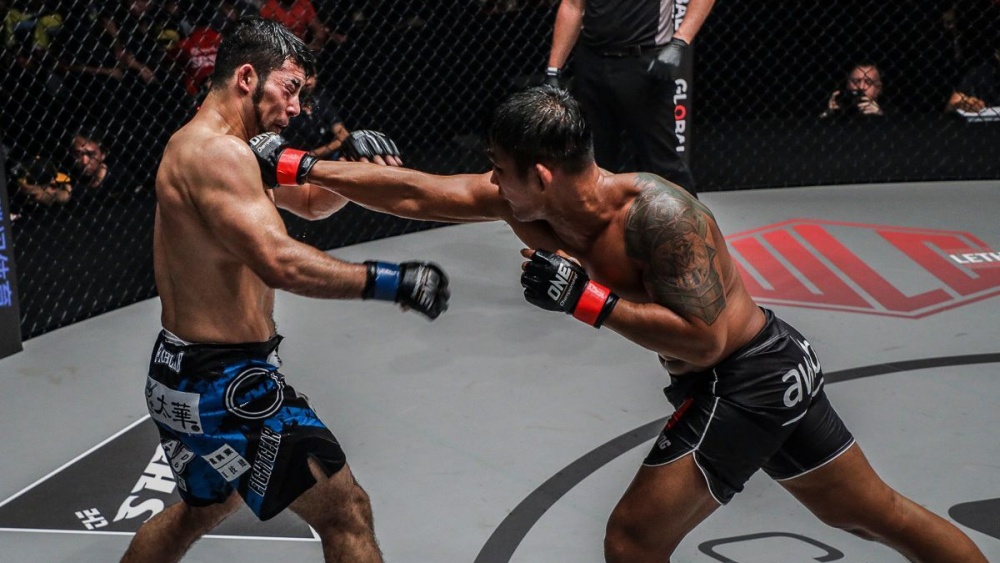 Let’s dive right into our list of amazing one-punch finishes:

Our list wouldn’t be complete without going over this fantastic knockout. It remains one of the most memorable moments in MMA history. Silva was the Ultimate Fighting Championship’s middleweight champion at the time, and he had been testing the waters at the light-heavyweight division.

Griffin had just lost the light-heavyweight title to Rashad Evans coming into the fight, and a win against would have helped him make his case for another shot at the title.

Unfortunately for Griffin, he was outclassed as soon as his UFC 101 bout with Silva started. Silva controlled the action, landing at will, while Griffin could barely land anything meaningful.

Silva secured one of the most impressive one-punch finishes in the history of all combat sports about three minutes into the contest, weaving and slipping through a barrage of punches from a charging Griffin as if he was “Neo” from the Matrix, then sending Griffin to the canvas with a perfectly time jab.

Forrest dropped to the canvas, and the referee rightly called the contest before Silva could follow up with some ground-n-pound.

Here’s what really makes this knockout special: Griffin wasn’t out cold. It was the way he fell to the canvas and the defeated look he had on his face that forced the stoppage. Not a single person cage-side complained about the stoppage.

This will forever remain Conor McGregor’s most impressive performance inside a cage. The build-up to the contest was as unique as the one-punch knockout.

McGregor pulled no punches when hyping up the fight, throwing every insult you could imagine at the then long-time featherweight champion. The highlight of the pre-fight build-up was when McGregor snatched the belt from Aldo during a press conference.

That almost led to a brawl on stage, but UFC president Dana White and a few beefy security guys kept both men separated and quickly returned Aldo’s belt to him. Aldo had had it with McGregor at that point. This was no longer just business; things had gotten personal.

That was what McGregor intended for the entire time. He had gotten into Aldo’s head, and he knew the Brazilian would come charging forward as soon as the fight started. There’s a clip of Conor practicing the counter he planned to use as Aldo came charging forward.

The UFC 194 bout played out exactly how McGregor hoped. Aldo came charging forward, and McGregor landed a perfectly timed left hook, bringing the fight to an end only 13 seconds into it.

N Sang ended one of the most epic fights in ONE Championship history with a knockout for the ages. Both men had already battled for four rounds, and fatigue had visibly crept in. “The Burmese Python” managed to muster one last barrage that sent Hasegawa stumbling all over the place.

N Sang stayed on him, putting him to sleep with a right uppercut that found its target. The win marked N Sang’s third successful defense of the ONE Middleweight Championship.

No MMA knockouts list would be complete without adding the king of walk-off knockouts, Mark Hunt.

Nelson was well-established as one of the tough guys in the UFC’s heavyweight division when these two collided. Nelson’s chin, high-level ground game, and sharp boxing technique were some of his best attributes heading into the contest.

Nelson was the favorite heading into the contest, but Hunt didn’t seem to care. He walked Nelson down from the opening bell, and he put him away with a right uppercut that sent Nelson to the canvas face first.

Things didn’t go Ngannou’s way the first time he went against Stipe Miocic for the Ultimate Fighting Championship’s heavyweight belt. Miocic managed to absorb his best strikes and wrestled his way to victory.

Many would say that fight was a defining moment in Ngannou’s career. He looked like a completely different fighter when the two collided for a second time at UFC 260.

Ngannou shocked many fans when he effortlessly stuffed Stipe’s takedown attempts; then, he secured a takedown of his own. Moments later, he landed a huge right hand that left Stipe unconscious and defenseless. That earned Ngannou the UFC’s heavyweight title.

Usman wrestled his way to victory when these two first fought at UFC 251, but Masvidal got the better of the striking exchanges.

Masvidal claimed him taking the fight on short notice hindered his performance, and he was confident things would go differently if he had a full camp for their rematch. He was convinced keeping the fighting standing would be his most significant advantage since he didn’t respect Usman’s punching power.

Things went differently when these two collided, but not how Masvidal imagined. It turned out Usman didn’t need to wrestle his way to victory. Instead, he landed one of the most beautiful one-punch knockouts in MMA history.

Masvidal’s corner had poured water in his hair to cool him down in between rounds, leading to one of the most beautiful knockout photos in all of combat sports.

Oliveira and Chandler squared off for the vacant Ultimate Fighting Championship lightweight title at UFC 262. The division’s undisputed, undefeated champion Khabib Nurmagomedov had retired from the sport, leaving the title up for grabs.

Chandler got off to a good start during their showdown, hurting Oliveira early in the fight, almost forcing a stoppage. Oliviera weathered the storm, and the fight’s momentum started changing in the second round. Oliveira caught Chandler with a perfectly timed punch, sending him to the canvas.

A Beginner’s Guide To MMA Sparring
Taking Time Off Martial Arts Training: How Long Is Too Long?
The 4 Most Common Striking Styles Found In MMA
Single Leg Takedown Vs. Double Leg Takedown Debate
The Most-Used Submission Holds In MMA
5 Reasons Why Muay Thai Is An Excellent Base For MMA
Transitioning Into MMA From A Boxing Base
Transitioning Into MMA From A BJJ Base
5 Techniques Every MMA Fighter Must Know