Also known as the Thai guard, the long guard in Muay Thai is commonly used as a primary defensive maneuver against punches, while at the same time, maintaining distance with the lead arm. The idea is to take the lead arm and stretch it out, sticking the glove in an opponent’s face or chest to keep an opponent at bay.

The lead arm is fully extended and stretched to protect you against straights and hooks from your lead side. It’s a common technique used not just in Muay Thai, but also in other striking martial arts such as boxing, kickboxing, and the like.

As you defend with the long guard, opportunities to counter will also open up for you in certain situations. Learning how to counter from the long guard will add a new dimension to your striking game. There are a variety of attacks you can employ from this one guard alone.

In the video above, Muay Thai World Champion and Evolve MMA instructor Panomroonglek Kiatmookao demonstrates four different kinds of strikes and counters you can initiate off the long guard in Muay Thai. These are by no means the only techniques you can do from the long guard, but they are some of the best and most effective. The first technique off the long guard is defending against an opponent’s left hook and countering with a rear elbow. Here are the steps to follow:

· First, shift your rear glove to the side of your head to block your opponent’s left hook. The glove should provide ample coverage of the cheekbone, and elbows should be tucked in to defend against a hook to the body.

· Extend the long guard to maintain distance, diminishing the power of your opponent’s left hook.

· At the same time, ensure your lead shoulder is covering the left side of your chin to prevent from getting attacks on the lead side.

· After blocking the hook, next is to take a quick step forward with your lead foot in order to close the distance. This will put you in a good position to land the elbow strike.

· As you throw the rear elbow, you want to bring your rear hand to the center of your chest, keeping your thumb close to your chest as you launch the strike.

· Like you do with punches, you should turn your hip and shoulder into the shot, pivoting your rear foot to maximize kinetic energy transfer, thus generating devastating power. 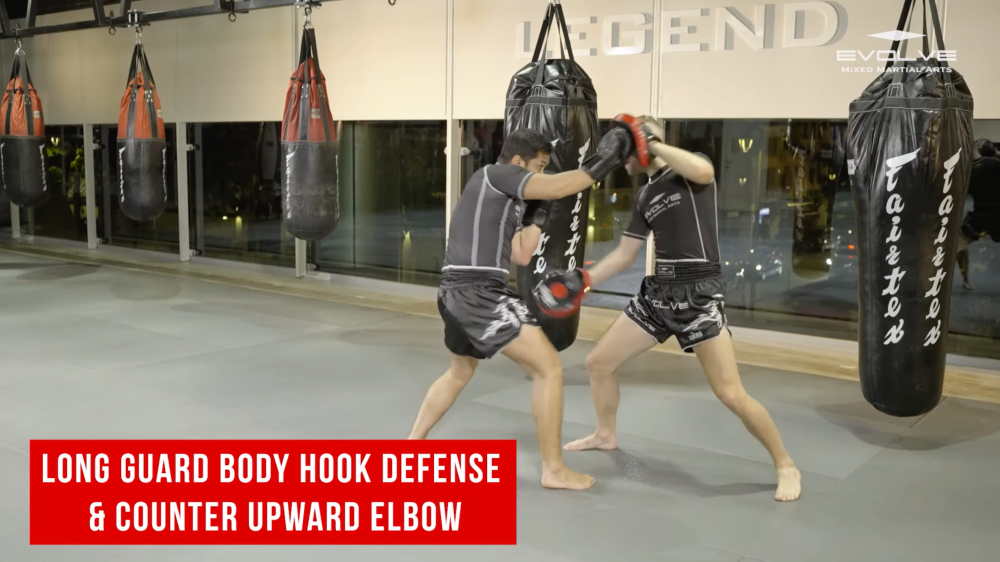 The second technique off the long guard is defending against an opponent’s left body hook specifically and countering this time with an upward elbow strike. Here are the steps to follow:

· In anticipation of an opponent’s left body hook, you will want to bend your knees and lean to the side to lower your stance ever so slightly, which puts you in a good position to block.

· As you block, keep your rear arm close to your face and body, providing good coverage of the chin with your glove, and keeping your elbows tucked to protect your midsection.

· At the same time, you want to employ the long guard to maintain distance, using your lead shoulder to hide your chin, protecting it from punches coming from your lead side.

· Try to “catch” your opponent’s left body hook with your rear elbow.

· Immediately after successfully blocking the punch, step forward with your lead foot to close the distance and to move into position to throw the upward elbow.

· As you throw the elbow, comb the side of your head with your rear hand, which produces an upswing motion, kind of like you’re throwing an uppercut but with your elbow.

· To maximize weight transfer and momentum, turn your rear foot, hip, and chest inward as you throw the rear upward elbow.

If you can land this elbow strike clean, it will instantly shock your opponent and in many cases, even score a knockdown. The third technique off the long guard is defending against the straight punch to the body, and countering with a lead elbow. Here are the steps to follow:

· Similar to the sequence in the previous technique, you want to lower your stance by bending your knees, in anticipation of the straight punch to the body.

· Try to block the shot with your rear elbow, at the same time, keeping your rear arm close to your face and body. The glove should provide ample coverage of the chin while still allowing the elbow to dip low enough to block the body shot.

· As you block, extend your lead arm in the long guard to maintain distance, using your lead shoulder to hide your chin, protecting it from punches coming from your lead side.

· To block the shot, you must turn your lead elbow inwards, towards the center of your body.

· Immediately after successfully blocking the shot, step forward with your lead foot to close the distance and to move into position to throw the lead elbow.

· As you throw the lead elbow, bring your lead hand to the center of your chest to maximize power. Last but not least, the last technique we’ll be reviewing is the cross long guard uppercut, and counter rear and lead elbows. Here are the steps to follow:

· Anticipating an opponent’s uppercut, you want to place your rear hand over your lead shoulder to cover your chin, as you employ the long guard to maintain distance.

· After a successful block, step forward with your lead foot to close the distance, putting you in position to counter with either a lead or rear elbow.

· You want to throw your counter elbows from the same side as your opponent’s uppercut. So if your opponent throws an uppercut from the left side, you want to counter with a right elbow, and vice versa.

· Lastly, turn your foot, hip, and shoulders into your elbow strikes to maximize power.

Of course, practice makes perfect, so it’s best to drill these techniques with a friend or sparring partner. 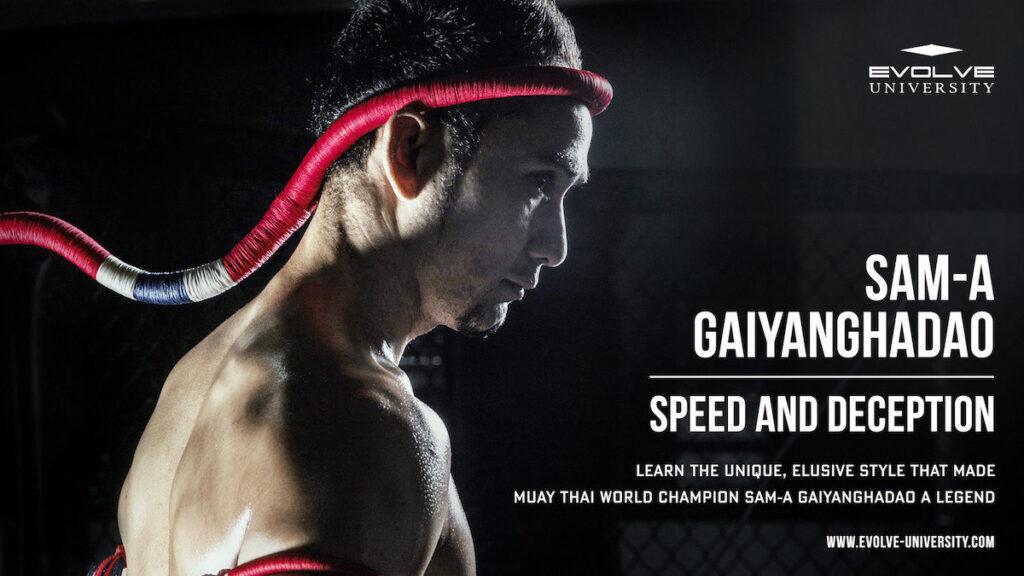 For the first time ever, Sam-A Gaiyanghadao unveils the secrets underlying his signature style, revealing how you can develop the speed, precision, and elusive defense that he is renowned for.

No detail is spared as Sam-A breaks down each technique, explains his strategies & tactics, shares mistakes borne from personal experience, and demonstrates drills from his very own training routine.

Created especially for martial artists who want to take their techniques to the next level, we’ve purposefully programmed this Master Course to incorporate all the subtle but game-changing nuances that define the multiple-time Muay Thai World Champion’s style.

Packed with over 9 hours of on-demand video content structured into 15 instructional chapters, Speed And Deception is the ultimate compilation of Sam-A’s legendary style.

Get Speed And Deception By Sam-A Gaiyanghadao Today!