3 Reasons Why You Need To Master The Muay Thai Clinch 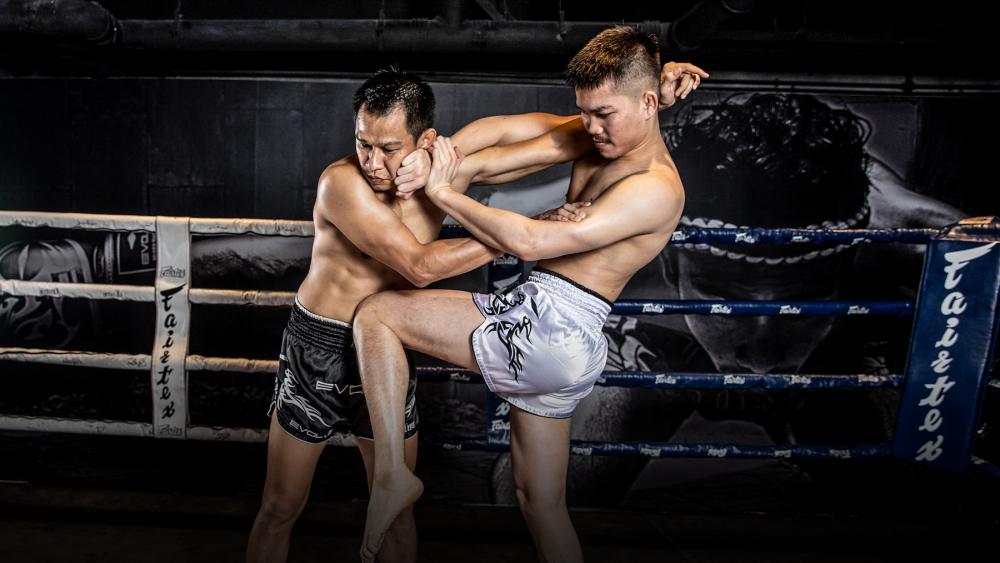 The Muay Thai clinch is one of the most important aspects of the ‘Art of Eight Limbs.’ It’s basically a technical hold wherein you lock your opponent, clasped around the neck and head with your hands so that you are able to launch a variety of strikes.

The most common strikes available from this position are knee and elbow strikes. However, you can also throw punches, perform sweeps and dumps, and score major points with the judges.

In addition to offense, the Muay Thai clinch is also an effective method of neutralizing an opponent who is particularly aggressive. By moving into close quarters, you’re able to tie opponents up and lock them in a certain position.

The Muay Thai clinch is very hard to avoid, especially at close distances. Once it’s locked in, it’s also very hard to escape from. The main concept of the clinch is control. It’s a way to limit your opponent’s movement and take away several options.

Adding the Muay Thai clinch to your game is transformative, and you instantly take your striking up a notch when you have this technique in your arsenal.

1) Helps you to better control the pace of a fight

As previously mentioned, the main purpose of the Muay Thai clinch is control.

The Muay Thai clinch helps you keep your opponent locked in a certain position, and allows you to dictate the pace of any given fight. It can also allow you to position your opponent in certain spots in the ring, whether that be in the corner or along the ropes.

When an opponent is too aggressive or even elusive, the Muay Thai clinch disrupts that opponent’s rhythm and gives you control instead, allowing you to dictate the pace of the action. A good clinch fighter is constantly pushing the pace of a fight and imposing his will on an opponent.

From the Muay Thai clinch, you are then presented with various options, both offensively and defensively. This sort of control puts you at a great advantage, but it also scores highly with the judges.

2) Helps to wear down your opponent

Another purpose of the Muay Thai clinch is to wear down opponents.

Further to controlling the pace of a fight, clinching is also effective in tiring an opponent and wearing him down across several rounds. This is a fantastic strategy against opponents with a great gas tank as you can deplete his stamina round by round, negating his cardio attribute. Just make sure that you have an equally good or better gas tank than your opponent.

Clinching can be gruelling as you are constantly jockeying for dominant positions and trading shots on the inside with your opponents. There is a critical level of offensive and defensive sets unfolding in every clinch.

Your opponent will no doubt feel the weight of your body leaning on him, as you attempt to drain the life out of his limbs. As fights progress, opponents with low energy and a weak gas tank will feel the effect of clinching the most, and it can turn the tide significantly.

A once aggressive opponent, drained of energy, is considerably less dangerous. Movement is hampered and power is decreased.

Also, as a show of dominance, a sweep from the clinch position will throw an opponent off balance and further establish your superior stamina and will in the eyes of the judges.

As previously mentioned, there is massive potential to do copious amounts of damage from the clinch position. A huge part of that stems from the many options of attack available once the clinch is locked in.

From the clinch, it’s easy to set up two of the most powerful strikes in Muay Thai — the elbows and the knees, which are weapons not usually deployed within typical striking range.

From the usual striking range, it’s too far out to throw knees and elbows, which will leave you vulnerable. You have to come in close to deliver these strikes, and the Muay Thai clinch will put you in the best position to do just that.

The Muay Thai clinch is a technique typically utilized in traditional Muay Thai by Muay Khao, or knee fighters. From the clinch position, knees are especially damaging and can incapacitate an opponent instantly with a shot to the midsection.

There are many variations of elbow and knee strikes from the clinch. Each can generate enough power and velocity to do incredible damage and score major points. They also have the potential to end fights in an instant. No detail is spared as Evolve MMA’s Muay Thai World Champions break down the fundamental aspects of the Muay Thai clinch. Structured and taught in a systemized way that will allow students to build their clinch game piece by piece, the Muay Thai Clinch Master Course is organized by position, covering the four main clinch positions — double inside, double outside, single collar neck tie, and double collar neck tie. Learn the vital details behind positional control, elbows, knees, sweeps, transitions, pulls, and defense in the clinch.

Whether you’re learning how to clinch for the first time and are looking to develop a strong foundation to build upon or are a seasoned practitioner with years of experience needing to refine your technique, fix bad habits, or add to your toolbox, this Master Course is for you.